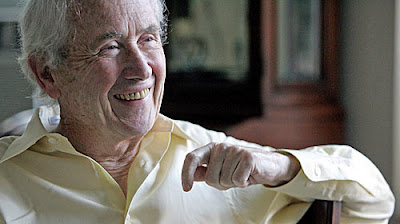 We've lost a lot of famous people here in the last few weeks - Ed McMahon, Farrah Fawcett, Michael Jackson, Karl Malden, each one somehow a credit to their field. And while I've always been a fan of Malden's consistently solid film work, none hit me quite like today's passing of Frank McCourt, whose Pulitzer Prize memoir Angela's Ashes was turned into an underappreciated 1999 film by Alan Parker that also happens to be one of my favorites.

When I was in 9th grade, we were asked to read a biography, and then dress up and present it to the class as our subject. I chose to read Angela's Ashes and did my presentation as McCourt, Irish accent and all. In researching and then eventually playing him, I discovered a great appreciation for McCourt and his life. Angela's Ashes immediately became one of my favorite films, and it is one that I have cherished ever since.

His elegant prose, his sharp wit and glimmering Irish charm made his books come alive, always vibrant and alive even when the life he chronicled was miserable and tragic. He was a literary treasure and a great man. Of all the celebrity deaths in recent weeks, his was the only one I cried for. And to be quite honest, only the second that has ever brought me to tears, the first being Robert Altman.

Here, in his memory, is a piece from John Williams' heartbreaking score to Angela's Ashes:

Rest in peace, Frank. You will be missed.