Collider has the exclusive premiere of the poster for Guillermo Arriaga's directorial debut, The Burning Plain (Magnolia, 9.18), starring Charlize Theron and Kim Basinger, while Yahoo has premiered the film's trailer. 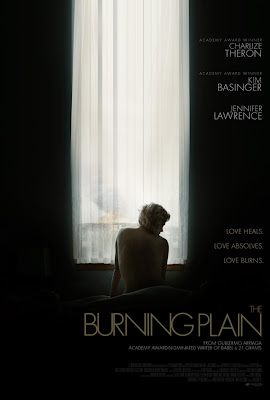 It has been several months since I first saw the film, and while my initial reaction was a positive one, I must say it has faded quite a bit with time. It's a solid work, but the red herring set-up of the trailer isn't that much of a revelation.

I don't know why Magnolia has waited so long to release it after its premiere at last year's Venice Film Festival, as the initial buzz seems to have faded quite a bit. The lackluster trailer really doesn't help either.

The Burning Plain will debut On Demand on August 21, followed by a limited theatrical release on September 18.
Email Post

Anonymous said…
I must remember to see this before it leaves SA cinemas. Else I will kick myself.
10:49 AM