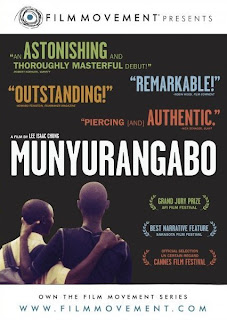 Near the end of Lee Isaac Chung's extraordinary debut, Munyurangabo, one of the characters turns to the camera and delivers a long form poem called "Liberation is a Journey" directly to the audience. The poem is a lament for Rwanda and the injustices it has faced in years past, one that is both hopeful and starkly honest. It may well be one of the defining moments of cinema in 2009, and one of the most powerful scenes in any film this year.

In many ways, it seems to sum up the entire film, which is an electrifying and engrossing portrait of modern Rwanda, a scarred country still haunted by the ghosts of the infamous genocide that took place just a little over a decade ago.

Following two best friends, Munyurangabo (Rutagengwa Jeff) and Sangwa (Dorunkundiye Eric), as they steal a machete with the plan to kill a man in revenge for killing Ngabo's father during the conflict, the film takes a revealing and intimate look at modern life in rural Rwanda, through the eyes of those who still bear the scars of genocide. 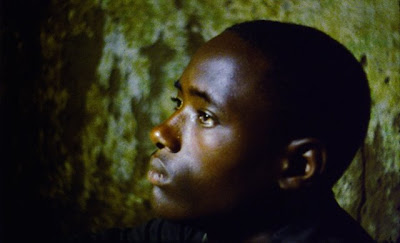 Anyone who has seen Terry George's Hotel Rwanda has a basic understanding of the confict, which occurred when two tribes created by European occupiers, the Tutsis and the Hutus, suddenly switched power and began systematic killings. Now, with the conflict over but the wounds still fresh, Sangwa, who is a Hutu, and Ngabo, a Tutsi, stop at Sangwa's family farm to rest for a few days before continuing on their grim journey. Sangwa's father, a former soldier, is immediately suspicious of Ngabo, however, and over the course of several days, old hatreds are revived and old wounds reopened, as a microcosm of the Rwandan conflict comes to life and plays out amidst a family drama where two friends who were never meant to be together find their friendship tested not only by prejudice and hate, but by the looming pressure of their morbid journey.

There is a deep and profound sense of humanity at work in Munyurangabo, which is astonishing given the path that brought it to the screen. Shot on the fly over the course of 11 days, Munyurangabo is the very first narrative feature film in the language of Kinyarwanda, and stars a cast of non-professionals - all of them actual products of the Rwandan genocide. Chung directs with an improvisational style, allowing the actors to bring their own experiences to the table and shape the story on their own, which infuses the film with an impressive amount of authenticity. 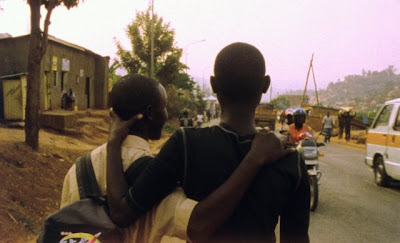 Shot in Super-16, the film has a raw, grainy quality that is not only impeccably composed but starkly beautiful. It's so naturalistic you can almost feel the heat and smell the scent of the air. So totally involving is Munyurangabo that it is easy to forget that it is indeed a narrative film. It's so immediate and authentic that it almost seems like a documentary. Chung doesn't try to add any unnecessary conflict or drama, instead he simply lets the camera capture the action as if it is a casual observer, and unseen third party on the road with Sangwa and Ngabo.

It isn't a film that is so much concerned with any kind of conventional plot. The camera likes to linger on simple actions for minutes on end with very few cuts, often filming through doorways as if the audience is merely watching from the next room. Instead, it's more of an impressionistic, emotional piece, a free flowing meditation on family, friendship, and redemption, dealing with the aftermath of the conflict rather than the conflict itself. This deeply humane and indeed masterful exploration of man's inhumanity to man is the kind of film most filmmakers only wish they could make - a brilliantly composed and flawlessly executed mood piece that is as stirring and expressive as it is haunting and affecting. Munyurangabo is a searing and unforgettable portrait of a nation in transition as seen through the eyes of those whose lives were irreparably changed, as well as an ode to the unifying spirit that makes us all human.