I recently saw Lee Isaac Chung's Munyurangabo (Film Movement, 5.29), and was pretty close to blown away. 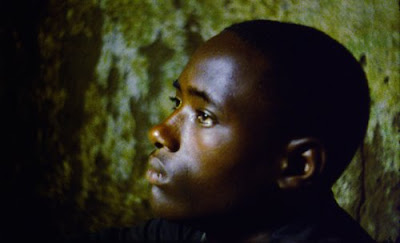 Set in modern day Rwanda, Munyurangabo follows two friends, Ngabo and Sangwa, as they find their relationship tested when they steal a machete and set out with a plan to kill the man who killed Ngabo's father. While making a stop at Sangwa's family farm, they find the wounds of the Rwandan genocide are still very fresh, and their resolve and friendship is put to the ultimate test.

The first thing that struck me about it was its raw, grainy texture and it's brilliant visual composition, but the film as a whole is a moving, poetic work. You'll be hearing more on this one from me in the days to come.
Email Post

Daniel said…
Really? I thought it was great, too, but so reminiscent of Dry Season ("Daratt"), which I saw last year and is, in my opinion, just a bit better. See it now! VERY similar story, but set in Chad and focused a bit more on the boy's relationship with his target, not with his father.

It's funny, the director of Munyurangbo is an old acquaintance/classmate of my sister. She knew he was a filmmaker but didn't put two and two together until she saw his name on the poster. Maybe she'll get in touch with him and see what he's doing next.
5:58 PM