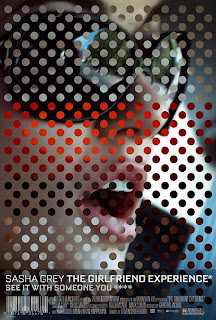 Historically, I haven't been a fan of Steven Soderbergh's more experimental works. I've had great respect for films such as Traffic, Erin Brockovich, and Che, but in films like The Good German, or especially Bubble, it almost seems like his head disappears completely up his ass.

His latest excursion into creative self exploration is The Girlfriend Experience, and unlike many of his previous smaller films, it is free of the self indulgence that has marked other, similar projects.

Sasha Grey in THE GIRLFRIEND EXPERIENCE, a Magnolia Pictures Release. Photo courtesy of Magnolia Pictures
Set against the backdrop of the 2008 presidential election and the looming economic crisis, The Girlfriend Experience also examines the economic intricacies of romance, and on people from all walks of life. Even call girls have to worry about economic down slides. So when Chelsea is asked for a freebie by a sex connoisseur who runs a call girl review website in exchange for a favorable review, she grudgingly accepts. However, it all backfires when the review turns out to be mean spiritedly negative, putting her career in jeopardy and her personal life in turmoil. But it all begins to look up when she meets a client who connects with her on a much deeper level, giving her a taste of the "girlfriend experience" for the first time.

The premise is undeniably interesting, if not exactly original. By putting the story in the context of the current economic collapse and the national changes represented by the recent presidential election. The idea of the tendrils of the economic crisis reaching into even unorthodox business is a very relevant topic, but I can't help but feel that the film is far too lightweight to fully deal with the subject. It's stylish and sexy, with Soderbergh's keen filmmaker's eye in full swing, but it feels every bit as shallow and superficial as an encounter with an actual call girl. Sure it's pretty, and its an engaging watch, but it fades just as quickly, skimming the issues that it raises in a breezy and abbreviated way.

At a scant 77 minutes, The Girlfriend Experience just feels slight, and it's non-linear structure doesn't seem to serve the story or the overall feeling. The performances from the mostly non-professional cast, while by no means stellar, are servicable nonetheless. One of the highlights is perhaps former Premiere editor and film critic Glenn Kenney as the sleazy sex conisseur. It's a cringe worthy scene, but highly effective.

It doesn't really change the fact that the film feels more like an exercise in style and construction than one of any great depth. It's intermittenly effective but strangely devoid of real emotion. This could be simply because Chelsea's life is so devoid of real emotion, but even when she finally finds a connection it feels cold and sterile. I respect Soderbergh's determination to continually branch out and explore his creativity, even if the results aren't always on par with his best work. Still, The Girlfriend Experience offers an intriguing if strangely empty glimpse inside a seemingly glamorous world, and the cracks in the sexy veneer where even the world's oldest profession is no match for modern day capitalism and the calls of the heart.

Charles Lyons said…
I agree with a few points you make, but I guess I'm just a bigger Soderbergh guy than you (I immensely enjoyed "Bubble").
my review:

Matthew Lucas said…
I will see a film because his name is attached to it, but I'm pretty hot and cold with his films. I found "Bubble" to be completely insufferable. It made my top 5 worst films of the year list that year.
10:19 PM

Unknown said…
Wow, "Bubble" probably made my top 5 best that year. Did you not dig the superbly simple score to that film, juxtaposed to what seems like simple, nonchalant lives those people are leading?
7:34 PM

Matthew Lucas said…
Not at all. I thought it was completely pointless. As were the lives they were leading. Couldn't stand it.
8:04 PM