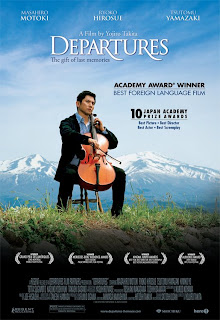 When Yojiro Takata's Departures won the Academy Award for Best Foreign Language Film, upsetting perceived front runners Waltz with Bashir and The Class, a lot of eyebrows were raised by critics, bloggers, cineastes, and Oscarphiles. At that time, very few people had seen the film, and this underdog from Japan was suddenly on everyone's lips and still a mystery.

It wasn't long after the Oscar ceremony that I saw the film, and I came in with pretty high expectations. Ari Folman's Israeli nominee Waltz with Bashir was one of my top ten films of 2008, and knowing the Academy's track record of awarding treacly tear jerkers over much higher quality films, I was a bit suspicious of Departures.

There are many who would say that is exactly what it is, a treacly tear jerker; and to some degree they'd be right. Departures is an absolutely shameless, borderline manipulative tear jerker filled with improbable coincidences that threaten to dissolve into sappy, sentimental mush. But strangely enough, it works, and it's wonderful. 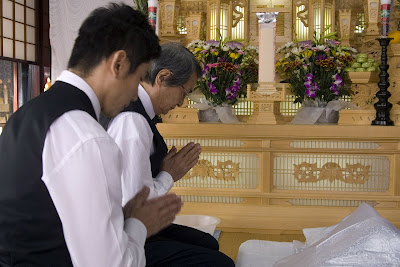 Masahiro Motoki as Daigo Kobayashi [L] and Tsutomu Yamazaki as Sasaki [R]
PHOTO COURTESY OF HERE MEDIA / REGENT RELEASING
Until about halfway through the film, I was all but ready to write it off as a schmaltzy misfire. But then something curious happens - a montage (yes a montage, that most hoary of cinematic cliches) comes along and lifts the film up on the wings of Joe Hisaishi's glorious cello driven score, and it never looks back. From that moment on, the true beauty of Depatures is awakened, and it goes staight for the heart.

The film tells the story of Daigo Kobayashi (Masahiro Motoki), a cellist who finds himself out of work when his orchestra goes out of business during an economic downturn. Out of work and desperate to find steady, reliable employment, Daigo turns to the want ads, where he finds an advertisement for a business wanting help with "departures." When he inquires about the business, however, he finds himself hired on the spot before realizing that "departures" means "the departed" - he is to assist in helping prepare bodies for burial.
He is initially appalled at the idea, but with work scarce he grudgingly takes the job. But he is so embarassed by the job that he even hides it from his adoring wife, Mika (Ryoko Hirosue) for fear of bringing shame to her because of its lowly status. But his boss, Sasaki (Tsutomu Yamazaki) is completely unphased by the public's perception. His goal is to give the departed a final, honorable send-off, and to provide a necessary and comforting service to their families. His adherence to ritual and courtesy soon rubs off on Daigo, who soon becomes devoted to his job, even as it threatens to estrange him from his friends and family. But everyone must experience death, and soon those around him begin to understand the power and importance of what he does. 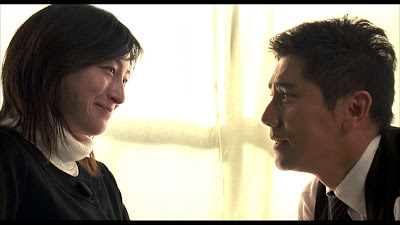 Masahiro Motoki as Daigo Kobayashi [L]and Ryoko Hirosue as Mika Kobayash [R]
PHOTO COURTESY OF HERE MEDIA / REGENT RELEASING
Departures is by no means in the same league as Waltz with Bashir, which is a near masterpiece. This, on the other hand, is merely solid entertainment. It's the kind of thing that is easy to roll your eyes at, even while wiping away a tear, knowing full well it shouldn't be making you cry, even though it is. In that regard, it's highly effective in its aims. It's not a film for the cynical, it's the kind of thing you just have to surrender to and let it take you on its journey. The structure is a bit clunky, driven by slightly awkward narration and some obvious plot twists. But by the time it reaches its deeply moving (if improbable) finale, it has pulled a complete hat trick, sneaking in and stealing the audience's heart just when they least expect it. It's a charming, winning piece of filmmaking that, while in no way deserving of the title of Best Foreign Language film of this or any year, is a heartwarming and bittersweet tale that hits all the right notes.