Review: "Anvil! The Story of Anvil" 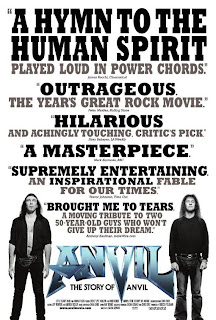 It's easy to make fun of rock bands that are still going long after its members have cracked 60 (hello Rolling Stones!). But after seeing Sacha Gervasi's wryly funny, surprisingly moving documentary, Anvil! The Story of Anvil, making fun of aging rock bands will never seem quite as funny or as fair.

Of course, the Rolling Stones have been on top for a very long time. But for Robb Reiner and Lips, frontmen of the heavy metal band, Anvil, success has eluded them from the very beginning. It becomes clear, however, that Anvil is consistently cited as one of the greatest metal bands of all time by some of the genres most successful groups.

It turns out, Anvil was one of the pioneering heavy metal groups, playing to audiences of thousands in Japan along with Bon Jovi and other great metal bands. But due to mismanagement, poor timing and all around bad luck, they did not end up with representation, and Anvil faded away into obscurity, leaving its only two original members working small, low income jobs far away from the spotlight and screaming fans. 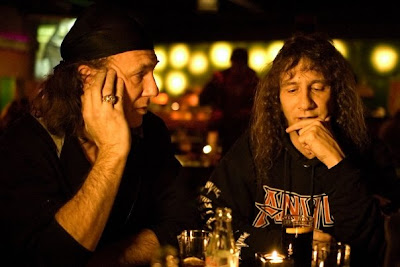 Then, nearly a quarter of a century later, opportunity comes knocking again for Anvil, when a European fan offers to represent them on a tour across the continent. Eager to return to their passion, Robb and Lips quickly agree, but the tour is anything but a smooth and welcome return to stardom. As tensions rise and tempers flare, it seems like the tour, and the band itself, may disintegrate around them.

As someone who is not a fan of heavy metal, and therefore knows nothing about the genre, I still found The Story of Anvil to be completely compelling. It's not so much about music as it is the human capacity to pursue their dreams in the face of great challenge. And while that may sound like a cliche, it becomes quickly apparent that one need not even like heavy metal to appreciate this warm, funny, and often quite touching human drama. 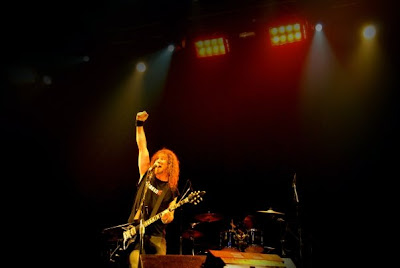 The music is ultimately beside the point, for the audience anyway. Because no matter what kind of music these guys are playing, it is their passion and determination that is so inspiring. Robb and Lips are a pair of colorful characters, and their unassuming nature makes it easy to root for them. Gervasi, who was a fan of Anvil from the very beginning, directs with a genuine affection for his subjects. Never before have we seen such a revealing and intimate portrait of a rock band that shows its subjects warts and all, and still comes off as being this funny and even heartbreaking. Robb and Lips are so wonderfully, unabashedly human and real that you can't help but identify with them.

Anvil! The Story of Anvil is a powerful and rousing documentary, the kind of crowd pleasing stand up and cheer movie that so many movies strive to be but so few ever are. It is a movie for the dreamer in everyone, and for anyone who ever dared to reach out and make it happen.