Kenneth Branagh's sequel to his 2017 adaptation of Agatha Christie's Murder on the Orient Express finds his Hercule Poirot wrapped up in a mystery in Egypt after he is swept aboard a river cruise by a friend for a wealthy couple's wedding. But the honeymoon cruise is interrupted as bodies start piling up, and Poirot once again finds himself on a case in which everyone has a motive and no one is beyond suspicion.

Murder on the Orient Express was a great bit of literary fun, and while Death on the Nile certainly has its problems, it's a mostly harmless whodunit whose history is much rockier than its predecessor. Delayed for nearly two years because of COVID-19, during which time lead actor Armie Hammer found himself embroiled in a cannibalism (!) scandal, and actress Letitia Wright expressed anti-vax views on Twitter, Death on the Nile seemed cursed. Now that it's here - it's not that bad, and is in some ways a more enjoyable experience than Branagh's current Oscar player, Belfast. Sure, the CGI is pretty bad (not a frame of this film looks real), Gal Gadot is a fairly weak lead, and the script indulges in some rather silly bits of world building and retconning to align itself with its predecessor; but this kind of melodrama is much more comfortably in Branagh's wheelhouse than Belfast, and has twice the personality (as goofy as it is). Despite its embattled cast and lengthy delay, Death on the Nile is hardly the disaster its reputation suggests thanks to some lovely character-driven grace notes and a game supporting cast who deliver a mildly engaging mystery that passes the time like a good, pulpy beach read. 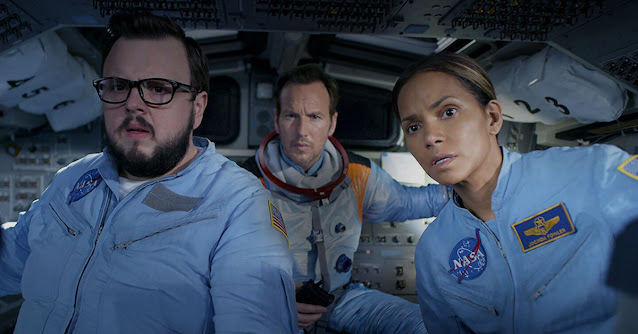 If you've ever seen a Roland Emmerich film (Independence Day, The Day After Tomorrow, 2012), you know exactly what you're getting going into his latest disaster epic, Moonfall. Depending on one's tolerance for that sort of thing, mileage will almost certainly vary, but for those willing to give in to its wanton silliness, Moonfall is a surprisingly fun ride.

Yes, it's essentially about the moon shifting orbit and careening toward Earth, but it's also so much more ridiculous that that. It turns out the moon is a superstructure (a Dyson sphere, for those sci-fi enthusiasts out there), and is under attack by a race of sentient machines who are determined to wipe out the human race. It's one of Emmerich's wildest plots, and it's fun to watch him let loose like this. Moonfall rarely makes any sense, but it's the kind of big dumb blockbuster that is fully self-aware of its own ridiculousness and embraces its inner goofiness. It follows a familiar disaster movie plot structure, almost to the point of parody, but the payoff is worth the journey. It's almost refreshing to see a film of this size and scope throw all self-seriousness to the wind and completely lean into its particular brand of outlandish spectacle. This is squarely in Emmerich's wheelhouse, and  and it's an absolute blast.