High concept romantic comedies like The Lost City used to be fairly commonplace in the 80s and 90s, but in recent years the genre has mostly been relegated to streaming, if it exists at all. In that regard, The Lost City seems like a bit of a relic, but in a good way - featuring Sandra Bullock in the kind of role she could probably do in her sleep, but that she excels at anyway. 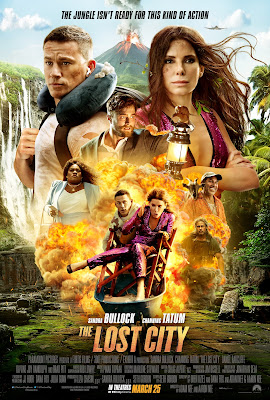 Here she stars as Loretta Sage, a romance novelist tired of her genre, longing for the days when she dreamt of writing "serious" scholarly articles with her late archaeologist husband. Instead, she buries her historic interests in fluff that sells, and she's finally ready to kill off her studly romantic hero (played by Channing Tatum's Fabio-esque cover model, Alan) and call it quits. That is, until she's kidnapped by a billionaire playboy (Daniel Radcliffe) and spirited away to a remote island to help him translate some ancient hieroglyphs in order to find a fabled treasure, and finds herself smack dab in the middle of an outlandish adventure worthy of one of her own novels, with the hapless Alan hot on  her trail to rescue her.

The Lost City is often deliciously silly, playing on Harlequin romance tropes with a loving wink, and it often gets by on the charisma of its stars. There are few real surprises here, and it's working with a familiar formula that feels a bit stretched even at 112 minutes. It's not up there with Miss Congeniality on the Bullock romantic comedy scale, but it feels like the kind of breezy mid budget studio comedy the likes of which are very much an endangered species nowadays, and that makes it something that should be cherished and protected.

Is it great? No. But it doesn't need to be. There's room in the world for mildly amusing romantic comedies. They're nice! They're fun! Bullock is funny. Tatum is sexy. Radcliffe is having a blast. It's easy to look at The Lost City with a bit of wistful nostalgia that perhaps makes it easier to grade on a curve. But between this and Marry Me, I can't help but hope that a renaissance of the star-driven romanic comedy might still yet come to pass. It doesn't always hit its marks, but when it does it feels like 2002 all over again, and I'm here for it.