Matt Reeves' The Batman represents the 4th iteration of the Batman franchise in my lifetime, following the Burton/Shumacher series in the 90s, Nolan's Dark Knight Trilogy, and Zack Snyder's DC universe. Each has been stylistically distinct from the others, but one can't help but wonder; what is it about this character that keeps filmmakers (and audiences) coming back for more? 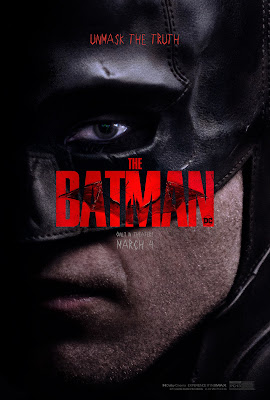 Personally, I prefer Burton's gothic imagining and Schumacher's neon drenched camp, but it's hard to deny the cultural impact that the character has made both in comics and on screen. Reeves' take on the character is still in the more grounded realm of Nolan's, but with a totally different tone and style. While Nolan's world had the kind of epic grandiosity of a Michael Mann crime film, The Batman more closely resembles a 70s neo-noir, less action film that detective story, its Gotham a place that only exists in the shadows. It's an apt visual metaphor for a city that has become hopelessly corrupt, with the justice system nearly entirely in the pockets of crime boss Carmine Falcone (John Turturro) and his right hand, the Penguin (Colin Farrell).

Robert Pattinson's Batman is unlike any Batman we've seen before. Brooding and wounded, yes, but almost naive, an angry symbol of vengeance on those who've wronged him and wronged the city, who discovers that he and his family have actually been complicit in the city's descent into corruption. This is all brought about by The Riddler (Paul Dano), a maniacal serial killer whose intent is to bring Gotham's corruption to light. An admirable goal, it seems, but when his terroristic tactics put thousands of lives in danger, Batman must act fast to save the city from certain destruction, and from itself.

Clocking in at nearly 3 hours long, The Batman is a bold, bruising piece of work, but surprisingly light on its feet. This is, perhaps, the first Batman film to really interrogate its heroes place in Gotham's corrupt milieu.  And while it could have certainly gone further in its exploration of the very idea of superheroes, it's interesting to see Reeves acknowledging that the typical villain line, "we're not so different, you and I" might be more than simple maniacal monologuing. It may not completely jell those ideas together - but there's something interesting there, more so than your typical MCU film, anyway. And Pattinson gives what is arguably the most layered performance as Bruce Wayne/Batman in the history of the franchise.

It's also a visual marvel; cinematographer Greig Fraser uses light judiciously and strikingly, creating an atmosphere of gloom and despair so that when the light really does break through, it feels like a revelation. Composer Michael Giacchino is also working at the top of this game, giving us an indelible new Batman theme that seems destined to enter the public consciousness in ways few movie themes do anymore.

Whether this is a one off, or the start of a new Batman franchise, it's hard to say (although the ending seems to tease the arrival of the next villain, despite Reeve's insistence that it's not a setup for a sequel), but it's a promising new take on Gotham and its denizens that doesn't feel like its simply replaying the hits or covering old ground. It's a near operatic morality play that isn't afraid to question its hero or show his weaknesses. It's the most invigorating a Batman film has felt in ages, and while Reeves may not hit every note perfectly, he conducts this thing like a great gothic symphony, and when it's cooking it's a work of hair-raising beauty.