A lonely man sits in a ramshackle cabin in the middle of a barren desert. He spends his days watching old VHS tapes chronicling the lives of several unknown people, seemingly shot from the perspective of person themselves. These, it turns out, are the souls that Will (Winston Duke) once approved to be born on Earth. But when one dies unexpectedly, Will's world is thrown into turmoil, and he must select a new soul to grant the gift of life, a task complicated by his determination to uncover the reason behind the death of one of his greatest achievements. 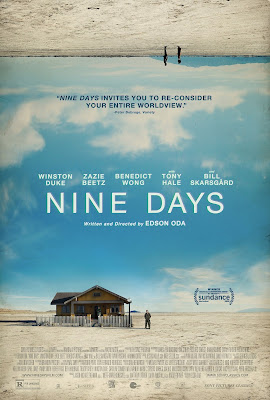 The parade of souls that come through his home undergo a series of interviews, not unlike a job interview, to determine if they are suitable for life on Earth. But one soul in particular challenges all of Will's preconceived notions of life itself. Emma (Zazie Beetz) refuses to answer many of his questions, rejecting their premises completely, she follows him as he goes about his work and interrogates his methods. She is frustrating, she is unique, she is, in fact, full of life. Will finds his entire worldview challenged, and his understanding of life itself put to the test.

It's a fascinating premise for a film, and first time feature filmmaker Edson Oda guides Nine Days with a quiet sense of restraint, anchored by Winston Duke's stoic performance. Oda wisely doesn't spend much time trying to explain the world of the film, it simply exists within the four walls of the Will's house surrounded by a sandy windswept landscape. It's contemplative, but ultimately a bit stagey, its action confined to a very specific space that never quite feels particularly cinematic, despite the intriguing premise. In some ways, it recalls Michael Almereyda's Marjorie Prime, another somewhat metaphysical exploration of existence that managed to more easily transcend its liminal sense of space.

Oda's writing is sharp, but one often wishes that the characters were more developed for something that's clearly meant to be a character study. Their emotional beats often hit hard but it's difficult to escape the feeling that we're missing the same things about them that Will is, unable to see them as clearly defined personalities. It's denouement is a lyrical powerhouse, but there's always something about it that somehow feels distant and intangible, as if it never quite fully embraces the spiritual ramifications of its premise. There's certainly a lot to love here, and Oda has established himself as a talent to watch, as Nine Days seemingly lays the groundwork for bigger and better things to come.