Movies based on Disney attractions have historically been a mixed bag. Pirates of the Caribbean famously launched a successful franchise, even if the sequels mostly failed to live up to the simple charms of the original. Dinosaur (2000), The Country Bears (2002), The Haunted Mansion (2003), and Tomorrowland (2015) didn't make many waves, while Brian De Palma's Mission to Mars (2000) was mostly well received by critics, even if most people probably don't even realize it was inspired by a Disney attraction that closed in both Disneyland and Disney World in 1993. 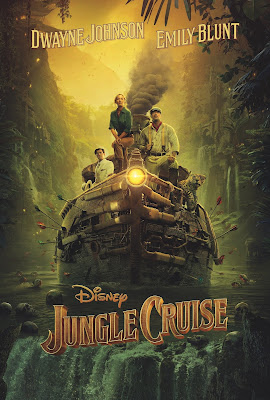 With only one Disney attraction spawning a bona fide hit, it's not surprising that it's taken this long for the studio to try again. But if any Disney attraction not already based on a movie was ever going to be turned into a big screen extravaganza, Jungle Cruise makes the most sense. An opening day attraction at Disneyland and a pet project of Walt himself, the Jungle Cruise is an enduring classic that was already loosely inspired by a movie (The African Queen), so its translation to the big screen wasn't a giant leap. With its parade of corny jokes and loose exploration plot, the ride provides a pretty wide canvas on which to apply any original story.

Enter Jungle Cruise, which casts Emily Blunt as Dr. Lily Houghton, an intrepid scientist determined to prove the existence of a mythical tree known as the "flowers of the moon," in hopes of using the tree's magic to create new healing medicines and help bring an end to the destructive conflict of World War I. Her guide into the Amazon rainforest is Frank Wolff (Dwayne "The Rock" Johnson), the skipper of a dilapidated river boat who specializes in cheesy adventure rides for wealthy tourists. They are pursued by Prince Joachim (Jesse Plemons), a German royal who hopes to use the flowers to help Germany win the war. But first, they must both face an army of undead conquistadors, led by Aguirre (Edgar Ramirez), who are forever cursed to haunt the Amazon after an unsuccessful attempt to find the flowers of the moon hundreds of years earlier.

Directed by Jaume Collet-Serra (The Commuter, Non-Stop), Jungle Cruise plays well on established properties like Raiders of the Lost Ark, The Mummy, and even Disney's own Pirates of the Caribbean to create an agreeable mix of comedy and swashbuckling action. Collet-Serra, who has made something of a career out of crafting enjoyable B-thrillers starring Liam Neeson, has an eye for action, and the set pieces in Jungle Cruise often feel like a throwback to epic adventure films of old. Its biggest drawback, however, is that its over-reliance on CGI makes it feel much less tangible and more plastic than the original Pirates, lowering the stakes as well as the grandeur. Aguirre and his conquistador brethren feel like knockoffs of Davy Jones and his crew from Pirates of the Caribbean: Dead Man's Chest, and don't look half as good, despite it being 15 years later.

But there's also plenty to enjoy here; amusing supporting performances by the always welcome Plemons and Paul Giamatti as a frazzled gangster, while Emily Blunt makes for an engaging lead in the vein of Rachel Weisz's character from The Mummy, and Jack Whitehall charms as her foppish brother, whose love of high living puts him constantly at odds with his jungle surroundings. It's a solid adventure yarn, and Collet-Serra balances its tone well, keeping with the tongue-in-cheek nature of the ride, but its occasionally questionable CGI makes one long for the more grounded action of the original Pirates of the Caribbean, whose use of CGI complemented its real elements rather than the other way around. It may be standard operation for tentpoles these days, but Pirates almost feels like the last of a dying breed, and Jungle Cruise never quite captures that same spark.