Marlon Riggs'  searing film debut may feel like a PBS documentary you might see played in schools (which, in fact, it is), but Ethnic Notions (1986) is such a comprehensive text on the origins of racist stereotypes in America that it demands to be one of the bedrocks of American cinema.

Riggs traces racial stereotypes from the origins of minstrel shows to reinforce the idea that enslaved people were happy, docile, and unintelligent, to the post-Civil War image of Black people as lusty brutes who needed the confines of slavery to be controlled. The film examines how these tropes evolved over time, from the pickaninny, the mammy, and the Sambo into more modern images like Aunt Jemima, shaping white perception of Black people through popular culture and guiding racist legislation and that still exists today. Riggs deftly juxtaposes even seemingly innocuous images with the horrible ideas they inspired, pulling no punches in its depiction of American history through the lens of anti-black propaganda. It may have been released in 1986, but Ethnic Notions is just as essential and relevant as ever, presenting a disturbingly clear case for the existence of systemic racism by exploring the ways in which insidious imagery has been used to marginalize Black people from the very beginning of the American experiment. 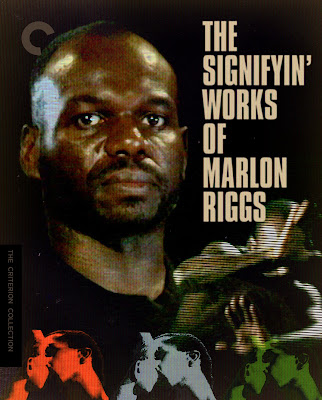 After the success of relatively more straightforward documentary, Ethnic Notions, Tongues Untied (1989) saw Marlon Riggs truly blossom into his own artist, delivering a poetic exploration of what it means to be Black gay man in America in the 1980s. Here, Riggs speaks in a clear voice, celebrating his queerness and his blackness and how those two identities intersect and fuel each other. It's at once joyous, celebratory, and sobering, examining not only the unique joys of Riggs' life but its challenges in a world that seems determined not to understand him. It's a work of unerring beauty, fusing the poetry of  Essex Hemphill with the beauty of black bodies intertwining, celebrating a uniquely marginalized identity and taking pride in its exultation.

Still, Tongues Untied pulls no punches in its depiction of the prejudices faced by Black gay men at the height of the AIDS crisis. Riggs acknowledges the revolutionary act of being a Black gay man in a country built on racism and actively marginalizing the LGBT community, while examining his own place within that community as a Black man. It's  a film that is consistently vibrant and alive, humming with the sheer joy of embracing one's own identity while exploring the challenges that identity presents in America. It is a bracing statement of self-identity and a towering work of self-expression and self-reflection, beautifully capturing a time and place yet reverberating through the decades as a work by an artist boldly stating his Black queerness, standing tall as an essential queer text and a bold, uncompromising act of pride.

Made up of pieces of interviews and footage of protests seemingly left over from Tongues Untied,  Marlon Riggs' 1990 short film, Affirmations (1990), makes for a dazzling companion piece to his own seminal 1989 documentary, revealing in the beauty of queer love and the first delicious moments of self discovery. It's an affirmation of Black queer identity and an act of radical self love that is a brief but powerful statement about embracing one's true self and living authentically even if the rest of the world hasn't quite caught up.

Riggs celebrates the eroticism of Gay black love in his 1991 short, Anthem, which adds a propulsive hip hop beat to erotic images of gay Black men. Riggs' exploration of what it means to be a gay Black man in the late 80s and 90s may feel rough around the edges, but they're so unerringly authentic and filled with such a celebratory lust for life that they're impossible to ignore. Anthem is one of his most purely joyous works, a depiction of gay Black men as sexual beings, unashamed of their love, their bodies, or their identities. Released in 1991, it feels nothing short of revelatory.

Riggs then chronicled the history of Black representation on television in Color Adjustment (1992) searing companion piece to his breakout documentary, Ethnic Notions.  From Amos & Andy to The Cosby Show to Roots to Good Times, Riggs examines how Black people have been represented on screen and how those depictions intertwine with both racist stereotypes and assimilationist ideals designed to make white people more comfortable. It's a fascinating film, and Riggs offers no easy answers, often questioning even the depictions thought to be progressive with on screen editorials like "is this positive?" Riggs interviews television legends like Norman Lear and Esther Rolle, interrogating popular culture through its depiction of Black life, and how those depictions both reinforced and challenged racial stereotypes, often at the same time.

A searing short film chronicling the experiences of five black gay men with AIDS, No Regret is one of Riggs' most deeply personal and searing films. Riggs allows the men to tell their stories uninhibited, at first shrouded by black filters that obscure parts of their faces, that eventually vanished, allowing the men to recount their experiences of being black and queer, and how those experiences often informed each other. They deliver these experiences directly to the camera, almost making eye contact with the viewer. It's a bracing depiction of proud, personal affirmation, confronting notions of race and sexuality that persist even beyond 1993, and dismantle the stigma of HIV by proudly embracing their own identities and examining how those identities have shaped their outlooks and their treatment in society.

His final film was also perhaps his most all-encompassing and definitive statement on race and sexuality. Shot while he was dying of AIDS-related complications, and assembled by his team after his death, Black Is...Black Ain't examines blackness in all its many facets, confronting colorism, homophobia, historical stereotypes, and historical ideas of what it means to be Black in America. Riggs also examines how sexuality intertwines with race, speaking directly to the camera from his hospital bed; still questioning, still probing, still interrogating the complex notions of race and sexuality and the intersections between, in what is essentially a sprawling summation of his life's work. It is an incredible, essential work, one that purposefully leaves more questions than it answers as it seeks a definition to something that means many different things to many different people, all thought the lens of the many ingredients in his mother's gumbo. It's a completely masterful work, a work of avant-garde brilliance whose prismatic lens lends its subject a breathtaking scope.