In 1991 a group of enthusiastic dreamers built what would become known as Biosphere 2, a massive internalized ecosystem meant to emulate Earth's atmosphere, in an attempt to study what it would be like to live in an enclosed ecosystem on another planet. Depending on who you ask, the mission was either a spectacular success or an abysmal failure, but regardless of the ultimate outcome it makes for fascinating viewing in Matt Wolf's new documentary, Spaceship Earth. 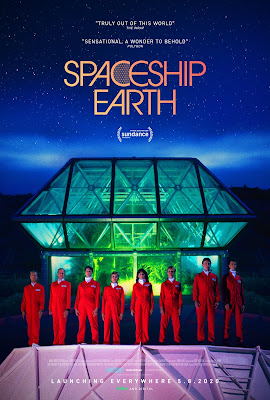 The group started as a commune of hippies in the 1960s who brought their talents together to build their own desert community before branching out by building a ship and going on to build and design everything from hotels to art galleries around the world thanks to the funding of a generous family benefactor. Inspired by works of science fiction, they turned to their most ambitious project yet - a sprawling recreation of Earth's atmosphere where eight intrepid explorers would spend two years sealed into an entirely self-contained environment to simulate life on another planet. The project was met with much anticipation from the public, and ultimately a great deal of controversy as disagreements arose over their methodology, calling into question the legitimacy of the experiment.

Wolf doesn't ask too many hard questions - dismissing many accusations leveled against the group out of hand without delving too deeply into them. The suggestion that the group was some sort of cult is mostly laughed off, and the lack of real scientific method that went into the experiment is fairly glossed over in favor of a more awe-struck examination of the participants and the utopian vision that drove them. For those of us who were either too young to remember it or not even born when it happened, there's an undeniable air of discovery to this odd little piece of history, and it's hard not to find their goals admirable, if perhaps a bit naive.

The film takes a turn with a bit of modern relevance when the wealthy backers eventually take over the product, led by none other than Steve Bannon, former advisor to Donald Trump and the architect of his unlikely 2016 presidential run. That's the point at which Spaceship Earth becomes the most fascinating - a portrait of idealism brought crashing back down to earth by capitalist greed. There are clearly many more avenues to explore here, and Wolf leaves several very big stones mostly unturned, but it's hard to resist the sheer boldness of the project, whose data (especially regarding climate change and greenhouse gasses) has been suppressed for the last two decades by Bannon. It's a mildly diverting documentary that makes for some intriguing quarantine viewing, painting a big picture but ultimately failing to ask big questions. Clearly this is a story worth telling, but the glossing over of the shortcuts taken by the participants ultimately leaves more questions than answers, and leaves us wanting to know the rest of the story.