While the Netflix original series, Hollywood, is playing revisionist history with the origins of the motion picture industry, other distributors are working hard to get cinema's real overlooked pioneers the spotlight they deserve. 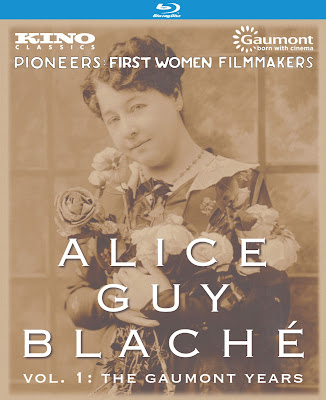 Spinning off from their successful box set, Pioneers: First Women Filmmakers, Kino Lorber has released several new collections focusing on individual filmmakers. First up, Alice Guy-Blaché, the subject of last year's documentary, Be Natural: The Untold Story of Alice Guy-Blaché, a true pioneer who became the first woman to direct a film and run her own studio. Volume 1 focuses on Guy-Blaché's years at Gaumont, one of France's leading studios in the early days of cinema. Here we are treated to some of Guy-Blaché's earliest films, including several that she has only recently received credit for. Most notably among them is 1896's The Cabbage-Patch Fairy, in which a fairy checks on a cabbage patch full of babies. At only 1-min long, the film is considered the first narrative film, a departure from the actualities and scenes of daily life that were common in the earliest days of cinema. While there isn't a plot, it does conjure an obviously fictional scenario that sets it apart from other films of the period. Guy-Blaché would revisit the idea with less success in 1902's Midwife to the Upper Class, establishing the idea of cabbage patch babies as an early trademark.

The set also includes some of her most incisive work in the form of comedies that poked fun at social issues of the day. On the surface, Alice Guy-Blaché's 1906 silent short, The Consequences of Feminism, seems like a warning about the dangers of feminized men. Guy-Balché  creates a world where men inhabit stereotypically feminine roles - doing the laundry, watching the children, gossiping in their hat-making circles; while the women smoke cigars, read the newspapers, and sexually harass the men without consequence. Therein lies the sly genius of this film. The Consequences of Feminism isn't a warning against feminism, as it initially appears to be.  By the end of the film, the men have had enough, and stage a revolt to take back their "rightful" place. It is, in fact, an argument for the necessity of feminism, a bold choice for 1906. By casting men in the feminine roles, Guy-Balché shows men just what it was like to be a woman in that time. By turning the stereotypes on their head, she cleverly subverts the conventions of the time, arguing that if men wouldn't stand for this sort of treatment, why should women? It's certainly a compelling argument. And even in the more enlightened 21st century, its subversive social criticisms still ring true.

Volume 1 also includes some rare glimpses into the world in which they were created, with Alice Guy Films a ‘Phonoscène’ in the Studio at Buttes-Chaumont, Paris (1905) providing a unique window into the early filmmaking process, and several "phonoscenes" of singer Félix Mayol. It's really hard to distinguish between Alice Guy-Blaché's Félix Mayol photoscenes (and she made several) because they're all just a few minutes of him standing on a stage singing, but the chronophone syncing of sound to picture, especially in 1905, is jaw-dropping, and their value as historical record is hard to deny. Guy-Blaché wasn't trying to be a filmmaker here so much as a historian, documenting popular performers of the era for posterity. And not only can we see him, but we can hear him - a voice echoing down through the centuries. It may not sound like much, but in many ways it's truly stunning.

Volume 2 focuses on Guy-Blaché's years at Solax, the production company she founded with her husband after moving to America. As head of the studio, she helped establish the house style for all films made there during her tenure. This also shows a period of creative growth for the filmmaker; not only does she excel in domestic comedies, but she begins to branch out into other genres such as westerns (Parson Sue) and historical epics like The Birth, Life, and Death of Christ, with somewhat mixed success. 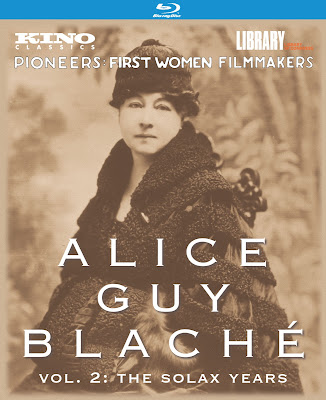 Her passion play wasn't credited to her until recently, but her attempt at a historical epic is surprisingly dry, taking a "stations of the cross" tableau aesthetic that isn't half as interesting as the comedies she was making around the same period. It's impressively mounted and and the sets are well constructed, but it's so strenuously respectful and static that it never really blossoms. She just doesn't feel like she's comfortable with the material, and the results are surprisingly passion-less, handsomely mounted and clearly laying the groundwork for the epic film but otherwise rather cold and distant.

Comedies were the Solax house speciality, and Guy-Blaché proved herself quite adept at them. Liquor gets mistaken for lime juice in her 1911 comedy, Starting Something, in which a series of people accidentally get gassed in quick succession. This early Solax film showcases Guy-Blaché's razor sharp comedic timing, and her use of repetition here make Starting Something a consistently funny short, building up dramatic tension but putting everyone back exactly where they started every few minutes. It just gets funnier and funnier as it goes along, and Guy-Blaché's refusal to switch things up mid-film makes the comedic action all the more potent. She also began to tackle three hankie dramas around this period. Take The Coming of Sunbeam, for example, a 1913 melodrama that features a grumpy old man suddenly finding out that he has to care for his young granddaughter after the untimely death of her parents. Resistant at first, he soon comes around and the two become inseparable, that is until she falls gravely ill. Reminiscent of Guy-Blaché's Falling Leaves from the previous year, but without it's more lyrical grace notes, The Coming of Sunbeam is still a beguiling little film, and the central pairing of the old man and the little girl is hard to resist.

There are so many gems to discover here, and both discs represent a veritable treasure trove of some of Guy-Blaché's most indelible work. These are must-own discs for any serious student of cinema, not only is Guy-Blaché one of the pioneering women of the art form, she was also one of its principal movers and shakers, starting off as a secretary and becoming one of the most influential figures in early film, helping to steer it away from amusing novelty to serious art form. This is an A+ collection that belongs on every cinema lover's shelf.