REFLECTIONS IN A GOLDEN EYE 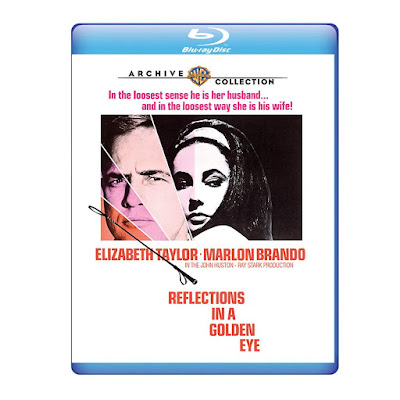 You have to give John Huston credit for his commitment to making idiosyncratic passion projects, but even in a career as varied as Huston's, the 1967 film Reflections in a Golden Eye stands out.

Originally released in a golden-tinted version (the figurative "golden eye" of the title), the film was eventually given a wide release with a more typical color palate to appease mass audiences. Warner Archive's new 2-disc Blu-Ray release gorgeously restores Huston's original vision alongside the general release version. The golden version gives the film a heated, otherworldly quality, as if its characters are wondering around in some sort of erotic dream, lost in a tangled web of their own unexplored desires. You have Brando slowly losing his grip on reality, Taylor flaunting her infidelity while completely dominating her husband - a figure of authority to everyone but her, and Forster as a young enlisted man who has much greater confidence than his commanding officer. It's an odd, dream-like film, and its unusual structure is occasionally uneven, but it's hard not to respect its bold vision. It's almost as if this is the film Huston's character from The Other Side of the Wind was making; a troubled, thorny, deeply personal exploration of the darkest recesses of the human psyche, and the results are hard to shake. 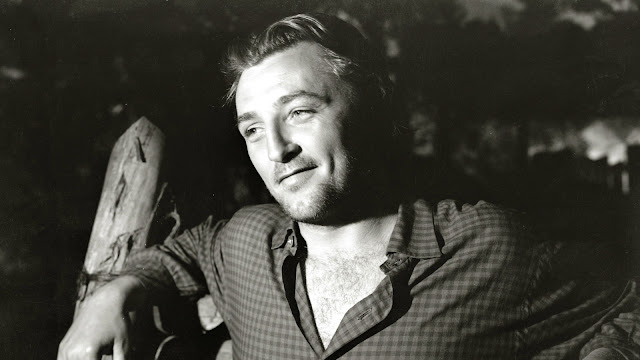 BLOOD ON THE MOON 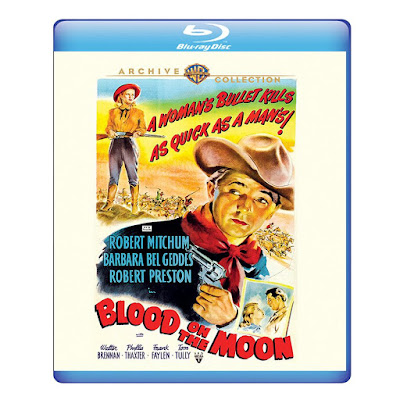 Robert Mitchum and Barbara Bel Geddes star in Robert Wise's 1948 western, Blood on the Moon, a surprisingly gritty oater that casts Mitchum as a hired gun who slowly begins to realize that he may be on the wrong side of the conflict.

Recruited by an old friend to help run a local cattle baron out of business by preventing him from removing his herd from an Indian reservation by the legal deadline (thus forcing him to sell the cattle for pennies on the dollar), Mitchum unwittingly finds himself falling for the baron's beautiful and headstrong daughter (Bel Geddes). As his relationship with her deepens, begins to understand that he isn't sticking up for the little guy at all, and is in fact the villain in someone else's story. It's an interesting twist on the lone gunslinger archetype, long before the trope would be subverted by the revisionist westerns of the late 1960s and 70s.

Wise was an incredibly versatile filmmaker, fitting right in across various genres, from horror (The Haunting, The Curse of the Cat People), to musicals (West Side Story, The Sound of Music), to science fiction (The Day The Earth Stood Still, Star Trek: The Motion Picture), so it should come as no surprise that he was equally adept at westerns as well. It's that workman-like adaptability that made him one of the most accomplished filmmakers of his time, although he is rarely given his due by auteurists. He had a knack for getting under his characters' skin, and in Blood on the Moon, Mitchum manages to find a sense of moral ambiguity to his amoral gunslinger that elevates the film above your typical western B-movie. Wise's commitment to a surprising amount of violence for 1948 gives the film actual stakes, and you can feel the conflict within Mitchum boiling over as the world he thought he knew no longer seems to make sense.

REFLECTIONS IN A GOLDEN EYE and BLOOD ON THE MOON are now available on Blu-Ray from Warner Archive.