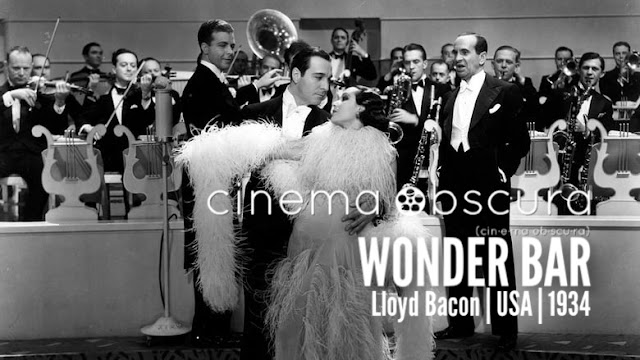 Wonder Bar is an odd entry in Busby Berkeley's impressive run of pre-code musicals for Warner Bros. For one, it's a huge downer, with its murder/suicide plot ending the film on a strangely sour note for a Depression-era toe-tapper; and it simultaneously manages to combine one of Berkeley's best musical numbers with one of his absolute worst. 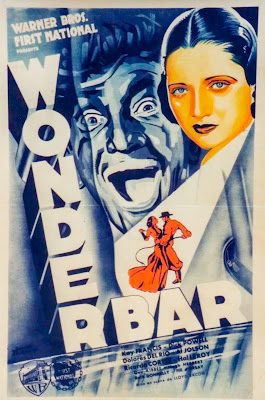 Coming on the heels Berkeley's legendary 1933 run of 42nd Street, Gold Diggers of 1933, and Footlight Parade, Wonder Bar (along with his last, and lesser known, film of 1933, Roman Scandals) feels at once tired and inspired, with its typical showbiz plot surrounding the scandals and drama in a Parisian nightclub, making it one of the biggest mixed-bags of the legendary choreographer's career. Al Jolson stars as Al Wonder, night-club owner and entertainer extraordinaire, who presides one the titular nightclub and all its comings and goings. He's in love with one of his Dolores del Río, as is fellow performer Dick Powell, but she's dealing with the fallout of her own relationship with onstage partner, Ricardo Cortez, who's planning on running off with Kay Francis.  Warner stalwarts Guy Kibbee and Hugh Herbert provide comedy relief as two henpecked American businessmen attempting to ditch their wives for a night on the town.

Of all the pre-code Warner musicals, Wonder Bar is perhaps the most overtly sexual, with its cheeky double entendres practically jumping right off the screen; not to mention it features the most blatantly queer moment I've seen in a pre-code film, in which a man taps on another man’s shoulder to “cut in” with his dance partner, and instead waltzes off with the man, leaving the woman standing on the dance floor. Jolson then turns to the camera and shrugs “boys will be boys.” It’s a funny moment without being a punchline, and impressive for the way it treats such a thing as normal in gay Paris in a major Hollywood production in 1933. It also features one of Berkeley's most dazzling musical set pieces in "Don't Say Goodnight," a dizzying masterpiece that features hundreds of dancers, 60 massive columns moving independently, and an octagon of mirrors that multiplies the dancers into infinity.

But then comes "Goin' to Heaven on a Mule," a cringe-worthy parade of racist stereotypes featuring Al Jolson in blackface as a former slave who goes to heaven with dozens of children as blackface angels. It's racist even by 1933 standards (watch out for the giant dancing watermelon), and even discounting the racial stereotypes it isn't even particularly clever by Berkeley's standards. It lacks the sparkle of his best comedy numbers like "Hollywood Hotel" (from Footlight Parade) and "Pettin' in the Park" (from Gold Diggers of 1933 , and is generally a lackluster climax for a film that summarily wraps up with a murder/suicide that's supposed to be a happy ending for its characters.

As it stands, Wonder Bar is a fascinating curio, structured like a high class soap opera in the vein of Grand Hotel sprinkled with a good dose of naughty pre-code humor, but once "Don't Say Goodnight" is over, the story doesn't seem to have anywhere to go. The cast is capable, and Berkeley delivers a knockout around the midpoint, but the screenplay can't seem it unravel its tangled romantic subplot, and the climactic 10-minute long blackface number is a hard sit that adds nothing to film. Worth watching for Berkeley aficionados and fans of classic musicals, but it lacks the escapist flair of his best work with its strangely downbeat ending.


Cinema Obscura is a regular feature at From the Front Row, highlighting little-known films that I believe need a second look. The mission of Cinema Obscura is to bring attention to hidden gems and forgotten masterpieces from around the world that readers may not otherwise have had a chance to discover.