The unique empathy and humanity of the films of Michael Palmieri and Donal Mosher (October Country) has quickly distinguished the pair as two of the most deeply insightful filmmakers working today. Like Frederick Wiseman but with a sense of brevity, Palmieri and Mosher examine the intricacies of small town life with the eye of an ethnographer, exploring the inherent contradictions and inescapable bonds that make America what it is. 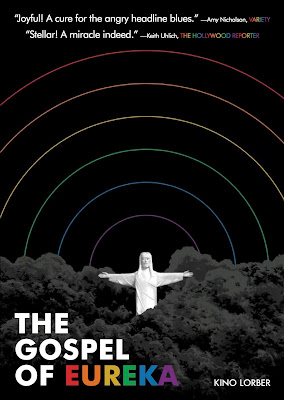 So here in 2019, at a time when Americans seem more divided than ever, a film like The Gospel of Eureka seems like a balm for the soul. Set in Eureka Springs, Arkansas, the film explores the peaceful but tenuous co-existence between a moderately famous passion play and a gospel-themed drag show. In the process, Palmieri and Mosher reframe Christian iconography and ideology through a queer point of view, as the town goes through a brief time of upheaval over a "trans bathroom bill."

Eureka was briefly the home of infamous anti-gay crusader, Anita Bryant, who tried to stage a comeback in the form of a Christian-themed show which proved to be an epic flop. From there, the town played host to notorious anti-Semite leader of the Christian Nationalist Party, Gerald L.K. Smith, who founded "The Great Passion Play" in 1968. To say that the town has had a rocky relationship with the LGBT community would be an understatement, which makes it the perfect place for a film like The Gospel of Eureka  Here, in this former hotbed of homophobia deep in the Bible Belt, gay culture has found a foothold. The filmmakers juxtapose the nightly pageantry of the drag bar with the Great Passion Play, which takes on its own air of camp with its over-the-top spectacle and copious amounts of male nudity.

In fact, one could argue that "The Great Passion Play" is a form of Christian drag - the entire thing is lip-synced to a pre-recorded vocal track, not unlike the musical numbers performed by drag queens in the bar. It's a fascinating dichotomy, and yet Palmieri and Mosher find commonalities between the two worlds. The drag bar is owned by a gay couple who are devout Christians. One of the "Passion Play's" biggest fans is a transgender woman. The owner of a local Christian book store speaks fondly of his gay father. The Gospel of Eureka seeks out and  explores the places where Christianty and queer culture meet, and discovers that the gulf is not as wide as we might think.

Even as locals fight over a new civil rights frontier in the form of discriminatory transgender bathroom bills, the filmmakers discover commonalities where there appear to be none. In Eureka it's not Christians vs. the LGBT community, because there is so much overlap. Eureka becomes a kind of microcosm for America itself, a place where Christianity and queerness not only coexist, but compliment each other. As narrated by the wonderful Justin Vivian Bond, The Gospel of Eureka is neither preachy or didactic, instead it eschews hatred and bigotry by investigating overlooked commonalities, rather its the queer subtexts of the gospels and Christian pageantry or the deep and abiding faith of those in the LGBT community.

Much like human sexuality, faith transcends boundaries, refutes hatred, and ultimately finds a place of belonging in the most unlikely of places. At a time when our country feels more divided than ever, films like The Gospel of Eureka feel all the more essential. Its sense of empathy feels almost defiantly out of step with the world at large, and yet it manages to touch on some deep and essential truths. It is a celebration of queerness, of faith, and of the deep and abiding ties that bind. If a place like Eureka can find such a balance, then there's hope for the rest of us.

Kino's new DVD release is light on extras - a couple of deleted scenes and a trailer, but it does bring back one of the crowning glories of home video releases - the DVD booklet. This might not seem like much in the age of comprehensive Criterion booklets, but there's something special about opening up a DVD and finding a booklet with more information about the film, as well as in-depth essay that explores the films ideas. Caden Mark Gardner's essay explores the themes of camp, religion, and queerness of The Gospel of Eureka, keenly highlighting its sense of empathy that never delves into pat "both sides" tropes. It's a lovely addendum to an altogether enchanting film that deserves to find a larger audience in its home video release.