One of the great joys of being a cinephile in the age of home video is not only the ability to watch a film whenever you want, but the ability to rewatch that film and savor moments in ways that aren't possible in a theatrical setting. 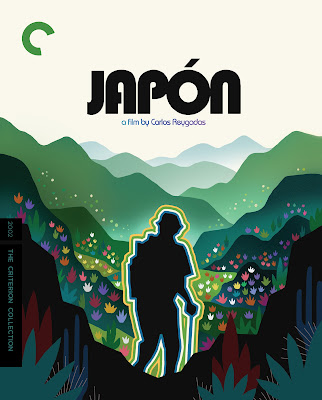 There's no experience quite like watching a film for the first time, not being quite sure what to make of it, while being fully certain that you've just experienced something incredibly unique and profound. That was my experience watching Mexican filmmaker Carlos Reygadas's remarkable debut film, Japón on its new Criterion Blu-Ray. I was familiar with Reygadas - I first encountered him in college when his controversial Battle in Heaven (2005) piqued my interest. Later, his 2009 film, Silent Light, topped my 2009 best of the year list. Yet, for whatever reason, it wasn't until Criterion recently released Japón on Blu-Ray that I finally caught up with it. And what an experience it was.

When the film was over, thanks to the beauty of home video, I was able to immediately rewind the ending and watch it again, and again, and again, still unsure of what Reygadas was trying to convey but fully aware that it was something wholly breathtaking. That final tracking shot, surveying the carnage of a deadly car accident set to Arvo Pärt's haunting "Cantus in Memory of Benjamin Britten" is a mic-drop of an ending, but what does it mean? Searching for answers of that sort misses the forest for the trees, because Japón isn't the kind of film that leaves itself open to literal interpretation. Inspired by the likes of Tarkovsky and Dreyer, Reygadas' films often take on an intangible sense of spiritual meaning that works on a level that must be felt rather than made corporeal. To seek palpable answers, to seek ideas made flesh, is to miss the point entirely.

Shot in 16mm CinemaScope, Japón has a lingering, dreamlike quality, a sense of mystery and portent that infuses every moment with a kind of otherworldly beauty. At the center is a painter (Alejandro Ferretis) who has traveled to a remote village in Mexico with the intention of committing suicide. His plans are put on hold when he meets an old woman named Ascen (Magdalena Flores), who is under attack by locals who want to claim land rights over her tiny shack, essentially leaving her homeless. Moved my her plight, the man decides to delay his suicide in order to help her, but their relationship becomes something much more than either of them expected.

Like much of the rest of Reygadas' filmography, Japón puts the sexuality of unconventional bodies front and center. It is often difficult to watch, the man seeking one last sexual coupling before his death, the old woman trying in vain to contort her body as he asks, but as in all Reygadas films, what's going on here goes far beyond mere fornication. It is a film about two lost souls finding themselves, but they don't necessarily find what they're looking for, at least not in each other. It is an enigmatic blend of the sacred and the profane, as much prayer as pornography. But nothing here is meant to titillate or arouse, instead, it's a poetic exploration of the nature of life itself, one that finds something of the divine even in the most desolate and desperate of locations, exploring the very nature of life and death and humanity's tenuous relationship with both. Ascen's name literally means "ascent," and it is here that The Man finds himself closest to God. But to what end? Reygadas leaves that up to the audience, pulling the rug out from under us in the film's final moments and leaving us to contemplate what it was all about.

That seeking, probing, and questioning is what Japón is all about. The Man may be our Virgil on either an ascent into Heaven or a descent into Hell, but it is left up to a profoundly moved audience to decide which.