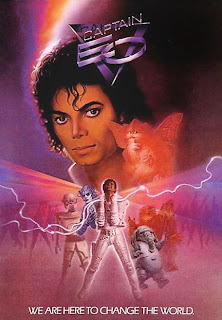 Now here's an interesting little piece of news, and a fitting first post of 2010. Disney has announced that Francis Ford Coppola's 17 minute long, 3-D Michael Jackson adventure, Captain EO, will be returning to Disneyland for a limited engagement in February.

The attraction will replace Honey I Shrunk the Audience in Tomorrowland. No word yet on how long it will run, or whether or not it will open at Disney World in Florida, where it ran from 1986 - 1997.

I remember seeing Captain EO at some point during its 11 year run. I don't remember when or how old I was, but I remember being wowed by it. I would like to see it again for nostalgia's sake, and to experience one of the great lost pieces of Michael Jackson's oeuvre.

For those who missed it, this is a great chance to catch up with a rare piece of film and music history.
Email Post

Tom said…
It's nice to see it make a comeback.

I can't believe they've been showing that "Honey I Shrunk the Kids" film for so many years.

Daniel said…
This was the first 3D film I ever saw in a theater, at Disneyworld. I think it was 1987, I was probably 6. I have the same memory as you and would like to see it again, though I don't think people will be gasping and grabbing in the air this time.
10:09 PM