Review: "Love in the Time of Cholera" 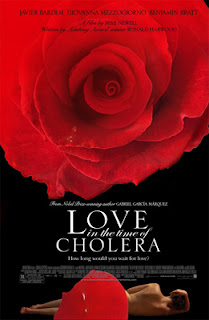 I’ve seen my share of bad films this year. Most of them I had pretty low expectations for in the first place. Honestly, how good can you actually expect films like WAR or Fantastic 4: Rise of the Silver Surfer to be? But when the stars align on a film like they did on Love in the Time of Cholera (directed by Mike Newell, screenplay by Ronald Harwood, starring Javier Bardem), one would expect a high standard of quality. However, in this case anyway, one would be wrong.

Love in the Time of Cholera is an embarrassing mess of a film from start to finish. After seeing Bardem’s wonderfully menacing turn in the Coen Brothers’ masterful No Country for Old Men, it is especially sad to see him surrounded by such jaw-dropping banality. Here, he stars as Florentino Ariza, a lowly telegram boy who falls for the daughter (Giovanna Mezzogiorno, in a very dull performance) of a wealthy man (John Leguizamo) in late 19th century South America, and ends up spending over 50 years pining away and waiting for her after she gets married to another man (Benjamin Bratt). 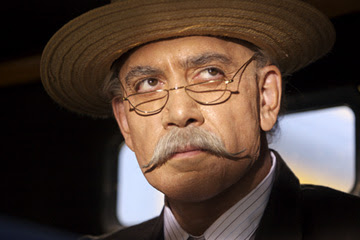 The movie spans all 53 of those years…and seems like it takes that long to do it, despite nearly constant, massive leaps in time that leave little room for emotional development, and create a rushed, episodic structure. The characters age along with the film, but you wouldn’t be able to tell from the poor make-up effects, which have little to no old-age effect, and turn young Florentino into a younger Robert DeNiro from Raging Bull instead of a younger Javier Bardem.

One would expect this kind of ineptitude from lower rent, less experienced filmmakers. But Mike Newell’s last film, Harry Potter and the Goblet of Fire, was a great success, and his Four Weddings and a Funeral garnered a Best Pictrue Oscar nomination. Ronald Harwood won an Academy Award just five years ago for his austere screenplay for Roman Polanski’s The Pianist. But you would never be able to tell from this film’s laughable dialogue, which sounds like it was borrowed from a particularly cheesy Hallmark card. 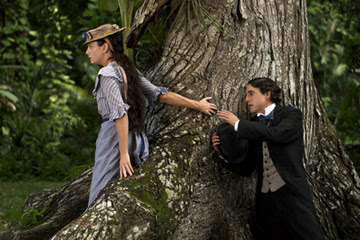 In fact, the whole film has the feel of a cheap romance novel crossed with a Lifetime original movie; strange considering the pedigreed literary source that the film was adapted from.

I don’t remember ever wanting so strongly to walk out of a movie before (and twice in one day, after the cloying August Rush). I just didn’t care how this movie ended, it gave me no reason to. Nobody in the film is particularly likable, and the film’s central couple have no heat or chemistry whatsoever. 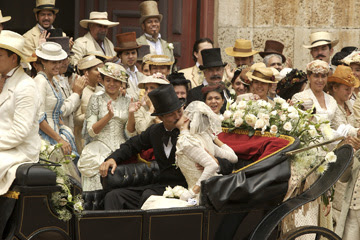 Love in the Time of Cholera is dull to the point of tedium, overlong and longwinded, and with very little point. It is a cinematic travesty of truly monumental proportions - a film that never finds its tone or its footing as it becomes more and more awkward. It’s not only a missed opportunity, but a miserable failure on all levels.

Email Post
Labels: Love in the Time of Cholera

Anonymous said…
This is an adaptation of a novel. Maybe you should have read the novel first to see if you liked that, because Magical Realism isn't for everybody. There is also a strong political context to the book and if you don't have much knowledge of the history of Colombia and of South America, you could easily miss out on the the critical symbolism which is found throughout Garcia Marquez's work. I advise people to read to novel first, and any critical notes they can lay their hands on to understand the subcontext...and then see the film. This isn't meant to be just a 'love story'...there's much more to it than that, unless the Director didn't stick to the novel.
7:13 AM

Matthew Lucas said…
A movie is a movie and a book is a book. A film adaptation of a book should be able to stand alone without the book, or it is a failure as a film. Which "Love in the Time of Cholera" is. I don't know how closely this follows Marquez's novel, but for the most part it seems like Cliff's Notes. The first two "Harry Potter" stuck very close to the novels, and were failures as films as a result. The same applies here. If what you say is true then this film destroys everything the novel was supposed to be. Since you have apparently not seen the film yourself, maybe you should see it first and not judge it based on the novel.

As we all know, the book is usually better than the movie anyway.
10:31 AM

Anonymous said…
I would like to point out, and this
is a rather picky point, but Magical Realism is not the same thing as "Lo Real Marvillso." It is a misconception that is both tiring and absurd. With that being, as an avid reader of Marquez and someone who is both a student of film and Spanish I can tell you this. The film sucks. Marquez, who was also a screenwriter, once claimed that the novel was something that could never be filmed. He was entirely correct. Your right though, anonymous 1, German painting is not for everyone. If you don't understand what I am talking about than you don't understand what magical realism is.
1:07 AM