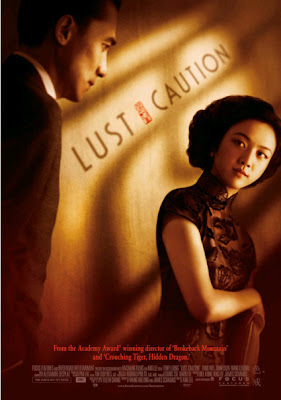 The MPAA has given Ang Lee's Toronto-bound "Lust, Caution" an NC-17 rating and Focus Features has accepted it.

Based on Eileen Change's short story about a shy Chinese drama student drawn into an assassination plot against a Japanese collaborator during WWII, the Chinese-language pic stars Tony Leung and newcomer Tang Wei.

Schamus said the specialty label accepts the rating without protest.

"As with so many of his previous films, Oscar-winning director Ang Lee has crafted a masterpiece about and for grown-ups, Schamus said.

I didn't expect Lee's follow-up to Brokeback Mountain to break the bank at the box office, unlike his last foreign language film Crouching Tiger, Hidden Dragon did back in 2000. But the NC-17 really puts a damper on its marketability, since many theaters refuse to show films with that rating, and many newspapers and magazines will not run their ads.
However, credit must be given to Focus for not bowing to convention and having Lee cut his film to get an R rating.
It seems as if there is still some artistic integrity in this world after all.

Anonymous said…
I applaud the rating as it seems appropriate given the graphic content. How is it that we accept oral sex scenes as ok for the very young (age <17) and yet prevent public reference to anything 'religious'? How confused and violent must our culture become before an association between overt sexual images and decaying social morality is clear?
2:09 PM