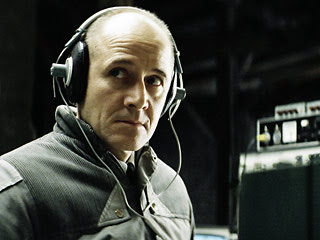 Ulrich Mühe (pictured above), the star of Florian Henckel von Donnersmarck's masterful Oscar winner The Lives of Others (still by far the best film I have seen this year), died suddenly of stomach cancer on July 22nd at age 54. Recently, Entertainment Weekly sat down with Von Donnersmarck to discuss Mühe's extraordinary performance:

ENTERTAINMENT WEEKLY: Looking at Mühe's other films, like Costra-Gavras' Amen (about Pope Pius XII's relationship with the Nazis during WWII) and your film, it seemed like the actor favored movies that made large political statements.
FLORIAN HENCKEL VON DONNERSMARCK: He said that the role of art is not just to leave people at peace, it's really to get them to think and to feel and to realize what an exciting thing life is.

The Lives of Others was your first film. How did a relatively unknown director like you get Mühe (a vet who'd also done movies for Michael Haneke) to join the cast?
Well, the thing is, he really liked my screenplay. He interviewed me for several hours to see if I was up to directing my own script! How much I knew about all the details of the GDR [German Democratic Republic]. So he actually took out his own Stasi files that he had claimed and put them in front of him.

When did you know that he'd take the role?
He asked me, ''Okay, you've written a screenplay where this person is in an attic for the duration of two hours and he's moved all the time by everything he hears — how do you act that?'' I said to him, ''I don't think you act it at all.'' And then he said, ''Okay, I'll do it.''