Killer of Sheep, the little-seen 1977 masterpiece by Charles Burnett, which is making its first ever theatrical run, is set for two more screenings in North Carolina, one at The Light Factory in Charlotte from August 24 - 26, and another at Duke University in Durham on September 25. Burnett himself will be in attendance in Charlotte. 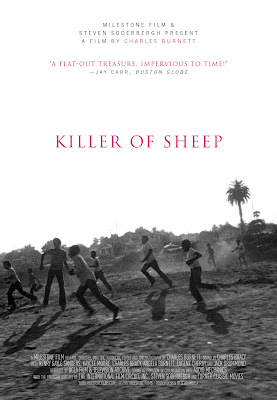 I reviewed the film shortly after its first NC screening in Winston-Salem back in June, and had this to say:

With its rough, unpolished style, slightly muffled sound and grainy black-and-white cinematography, “Killer of Sheep” becomes a kind of historical document, a snapshot of a specific place and time that honestly could have taken place anywhere at any time. And in doing so, it opens up a kind of window to ourselves. This is life, in all of its ugly messiness and quiet glory. These are the small moments, the ones most movies never show. This is life as it is actually lived. How many movies ever dare to show life at its most mundane?

Yet those are the moments that Burnett embraces, as Stan relishes the warmth of a coffee cup against his face, children playing games on the street, commonplace thievery, getting a flat tire or just loading up a pickup truck, all intercut with the never-ending slaughter of the sheep. And even with a cast of unprofessional actors, “Killer of Sheep” is always vibrantly alive and unflinchingly real.

Don't miss your chance to see one of cinema's forgotten treasures on the big screen for the first time.

Check out the trailer here: