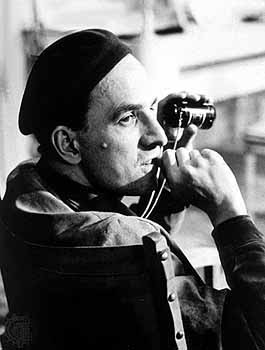 Swedish director Ingmar Bergman, one of the masters of modern cinema whose brooding and incisive studies of the human psyche won international acclaim -- and three Oscars -- died Monday at age 89.

Bergman died at his home in Faro, Sweden, his daughter Eva Bergman told Swedish media. A cause of death wasn't immediately available, but according to friends, he had never fully recovered from an October hip operation.

Bergman's "The Virgin Spring" (1960), "Through a Glass Darkly" (1961) and "Fanny and Alexander" (1982) won the foreign-language Academy Award. The director also won the Irving Thalberg Award as well as the Directors Guild of America's D.W. Griffith Award for lifetime contribution. In addition, he was nominated for Oscars multiple times in the writing and/or directing categories.

Bergman was truly one of the greats. I was first introduced to him with The Seventh Seal, his cerebral and haunting examination of mortality, and one of the greatest achievements in cinema history. Watching it has always reminded me that they just don't make them like they used to.

Hats off to you, Mr. Bergman, wherever you are. The film world has lost an icon.
Email Post