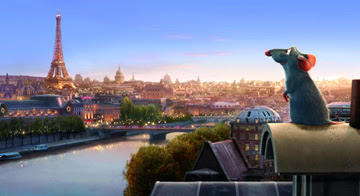 Susan Thea Peacock posted this spot on entry over at Awards Daily:

You know what it’s like. You’re watching and perhaps being entertained by a movie, but you’re not enveloped by it. Then something happens—a shot, a line, a kiss, a sigh—and you are magically and profoundly transported to a place deep inside yourself.

Up until seeing Ratatouille this week, I hadn’t experienced that kind of sucked-from-your-seat moment in the cinema this year. It could be the first true Oscar contender of the year—not surprising given it comes from Pixar and the creative mind of Brad Bird, auteur of the Oscar-winning hit The Incredibles and the critically beloved, if under-seen The Iron Giant.

A film that shares its predecessors’ wit and anarchic spirit, it is a scene toward the end that really resonates. If you haven’t seen it yet, there are semi-spoilers after the jump.

The beat I’m referring to captures the inner life of a somewhat secondary, though crucial character: famished food-critic Anton Ego, who is voiced wonderfully by Peter O’Toole. When tasting the titular meal, we are thrust into his memory as he recalls a moment from his childhood.

I agree completely with Peacock. The moment she refers to is also my favorite scene in the film. The moment Anton Ego placed that first bite of ratatouille in his mouth and his eyes widened, my eyes teared up and suddenly I was a kid again too, watching classic Disney cartoons with my parents and re-experiencing the magic they bring.

Ratatouille captures the glory, the wonder, and the charm of a Disney long since passed. It is a masterpiece - the best American film of the year thus far. It is one of the most thrillingly original cinematic experiences I have had in a long time. Not since Hayao Miyazaki's luminous Spirited Away have I been so enraptured by an animated film.

This is one for the ages, folks - the kind of film that reminds us why we go to the movies in the first place.