Marvel has all but gotten its formula down to a science at this point, turning into a well-oiled machine that churns out easily digestible content multiple times a year. Due to the effects of COVID-19, Black Widow is the first new Marvel film to hit theaters in nearly two years, since Spider-Man: Far From Home was released in July of 2019. 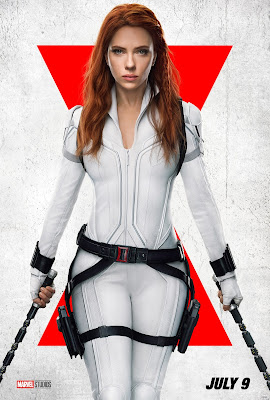 Originally slated for release in 2020, Black Widow is a prequel of sorts, that follows the adventures of the titular heroine, Natasha Romanoff (Scarlett Johansson) after the events of Captain America: Civil War (2016) left her exiled from the Avengers. Here, we see her reunited with her sister, Yelena (Florence Pugh), who was also a victim of Soviet-era mind control experiments designed to create an unstoppable force of "widows," female super soldiers under the control of Dreykov, aka Taskmaster (Ray Winston). Together, they must reunite with Yelena (Rachel Weiss) and Boris (David Harbour), two Soviet operatives who once posed as their parents in a Cold War-era spy mission in the United States, to take down Dreykov before he can unleash his widows, infiltrate world governments, and impose his will upon international affairs.

Black Widow is a slick entertainment in the standard Marvel style, hewing more closely to the paranoid spy thriller vibe of Captain America: The Winter Soldier, right down to its typically over-the-top climactic superhero smackdown taking place on an enemy vessel in the sky. Pugh and Harbour make especially entertaining additions to the MCU, and director Cate Shortland (Somersault) peppers the film with some engaging set pieces that alternate between action and comedy. The problem with Black Widow is how, perhaps moreso than any other film in the MCU, it typifies the kind of uncomfortable relationship between Marvel and the interests of American imperialism that as been a through-line in the series.

Of course, some films in the MCU certainly pay lip service to questioning institutions, as SHIELD agents actually being secret HYDRA agents have made up major plot points in the film, but the belief in the American ideal, no matter how flawed its institutions may be, remains a cornerstone of the MCU as embodied by contrasting heroism of WWII era patriot, Captain America, and billionaire entrepreneur, Iron Man. Black Widow s plot revolves around a Cold War era mind control plot being carried out by Soviet agents who embed communist spies right into American neighborhoods. These mind control tactics come to represent a hegemony of thought, a lack of personal freedom, and Natasha's escape to the United States represents an achievement of liberty, a shedding of the chains of communism. Nowhere is this clearer than in the portrayal of Harbour's Red Guardian, a kind of Soviet foil to Captain America, as a total buffoon. Drunken and overweight, with the words "Karl" and "Marx" tattooed across his knuckles like Robert Mitchum in Night of the Hunter, Red Guardian comes off like a store brand Captain America, a Soviet-era knockoff who's rivalry with Cap is completely one-sided and quixotic.

Whether out of a sense of comedy or something more insidious, Black Widow's anti-communist subtext almost feels Randian at times, taking potshots at Soviet inferiority at every turn, reinforcing the idea of America's (and therefore capitalism's) inherent superiority. It should come as no surprise that a film churned out by the biggest entertainment conglomerate on earth, is in fact a de facto apologia for American exceptionalism, but it's certainly indicative of the way capitalism is treated as the inevitable default, and communism becomes a punchline served up for cheap yuks. Its consistent and sometimes subtle digs feel almost propagandistic, working to undermine socialism by relying on hoary Cold War cliches that would have felt old hat even 30 years ago.

Black Widow is certainly a slick entertainment, but that's what makes its underlying themes so troubling. By turning its human trafficking plot into a Cold War farce, it loses any potential teeth it could have had by shrugging it off as a problem of communism, trapping its adherents in a prison of conformity. There's certainly a lot to like here, but don't be fooled by its shiny veneer, because what makes this film tick is ultimately a tired bit of imperialist corporate propaganda designed to make capitalism seem like a moral default rather than a destructive aberration.