The first part of a planned trilogy being released over a period of a few weeks on Netflix, Fear Street Part 1: 1994, is based on R.L. Stine's popular series of horror novels for teens that were kind of like the older, meaner cousin of Goosebumps during the 1990s. 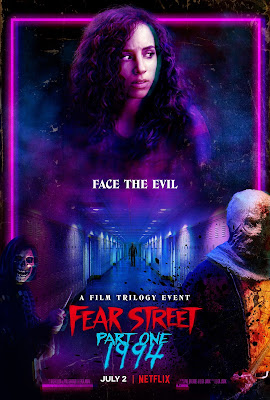 This first entry in the trilogy introduces us to a group of teenagers from the seemingly cursed town of Shadyside, where seemingly normal people have been turning into murderers for generations. After an encounter with a group of bullies from a wealthier rival town, the teens soon find themselves under siege by a gang of killers from the town's haunted past - and must band together to break the centuries-old curse or die trying.

Fear Street 1994 plays a bit like Scream meets Scary Stories to Tell in the Dark, taking elements from various Fear Street novels and using them as both a winking nod to horror films from decades past and a terrifying thriller in its own right. And yet, despite its use of a nostalgic property from the 1990s, never feels like its leaning too hard into dewy-eyed recreations of childhood properties. This is, first and foremost, a horror film, and director Leigh Janiak wastes no time in letting us know that we are far, far away from Goosebumps kiddie horror, even though its aesthetic is very grounded in the kind of teen horror films that populated the cinematic landscape in the 1990s. It also distinguishes itself by putting a queer romance front and center rather than on the periphery, with its two "final girl" protagonists former girlfriends whose relationship has been on the rocks ever since one of them chose status over love by moving to the rival town, Sunnyvale.

It it going to reinvent the horror genre the way some have claimed in rapturous social media notices? Most likely not, it's all a bit too rooted in elements of the past to really pave the way for horror's future, but that doesn't stop Fear Street 1994 from being one hell of a good time. It's been a long time since we've seen a horror film that's this much fun, a purely enjoyable chiller that beautifully captures the feeling of its pulpy teen novel roots. I can't wait to see where this series goes next.