Lee Isaac Chung is one of those under-the-radar filmmakers who has yet to be receive the recognition he deserves. His debut film, Munyurangabo (2009), was one of the best films of the 2000s, but received little attention, so it is gratifying to see his latest film, Minari, receive widespread praise from critics and even a great deal of awards buzz to go along with it, so far racking up nominations from the Golden Globes and the Screen Actors Guild. 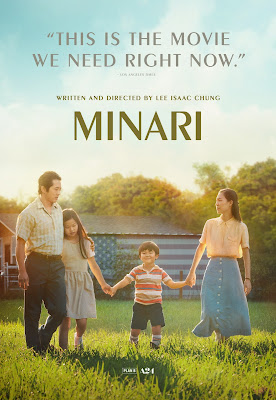 Minari is certainly the most mainstream film Chung has directed, but that's a testament to the universally recognizable story that it tells. Focusing on a family of Korean immigrants who move to Arkansas establish their own farm and make their own way in the world, the film turns Chung's own childhood experiences into a uniquely American tale of hardship and personal triumph that is the very picture of the ideal of the "American dream." Steven Yeun stars as Jacob, the pater familias who is plucking away at someone else's chicken farm, dreaming of running his own some day, so he purchases a piece of land in the middle of nowhere with a ramshackle mobile home, and uproots his family to make the dream a reality. His wife, Monica (Han Ye-ri) is unhappy with the move and misses their own home, and 7-year-old David (Alan Kim) and his little sister Anne (Noel Kate Cho) are bored, which gets David into trouble.

But David also has a series of health problems, leading the family to invite grandmother Soonja (regular Hong Sangsoo collaborator Youn Yuh-jung) to move from Korea to come help raise the family. While Jacob takes on the Sisyphean task of turning his barren land into the farm of his dreams (with the aid of Will Patton's holy roller neighbor) causing rifts in his marriage, David butts heads with Soonja, whose old style of parenting soon reveals a deep and unexpected connection between American David and his more traditional Korean grandmother.

Minari is a film about family connections, and Chung weaves them slowly, almost effortlessly, over the course of the film, creating a seemingly organic narrative whose emotional undercurrents hit unexpectedly. It's languidly paced, and almost defiantly plotless, but that's precisely what makes it so special. Chung has crafted a deeply personal ode to his family and his roots, and in the process delivered a film about the immigrant experience that feels profoundly universal. Buoyed by Emile Mosseri's delicate score (who is quickly becoming one of the most interesting up and coming film composers after his stellar work on 2019's The Last Black Man in San Francisco), Minari sometimes feels like the hazy recollections of a dream, made up of memories of childhood floating back in a kind of nostalgic reverie. Yet Chung doesn't shy away from the challenges and hardships of the American immigrant experience, and that makes the small victories feel all the more profound. While this may not be representative of the experience of all immigrants, Chung finds common ground in the bonds of family and uses it as a window into collective hopes and dreams. It's the kind of film whose emotional power only grows in retrospect, its most indelible moments springing from the seemingly mundane moments of life that you didn't realize were so important until they were in the past. That is the unique and subtle power of Minari, an altogether lovely film whose grace notes linger in the air long after the music has stopped playing.