One of the most high profile casualties of the Civil Rights movement, Black Panther and radical socialist Fred Hampton (Daniel Kaluuya) was assassinated in 1969 in a raid conducted by the FBI and Chicago PD. His death remains a touchstone for the black liberation movement, and yet another in a litany of examples of police conspiring and using violence against black people. Shaka King's Judas and the Black Messiah  chronicles Hampton's rise and fall through the eyes of Bill O'Neill (Lakeith Stanfield), a petty criminal turned FBI informant who helped infiltrate the Black Panthers in order to keep himself out of jail for Grand Theft Auto. The film is simultaneously about Hampton's rise as a major force in black America, and the emotional and psychological toll on O'Neill by selling his soul to the police, becoming the Judas to Hampton's black messiah. 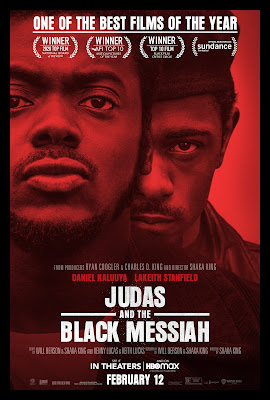 King, who previously only had one feature film credit to his name (2013's little-seen Newlyweeds), directs with the kind of verve that occasionally recalls early Spike Lee. Judas and the Black Messiah is raw, energetic; a ferocious howl of rage, filled with the fire of revolution and the pain of betrayal, and progress undercut by weaponized whiteness. It's rare for a major studio film to deal so frankly with radical socialism, especially in such a positive light, that one almost wishes King had delved deeper into what Hampton was fighting for on a more macro scale. It's thrilling to see the Black Panther party portrayed as the leftist organization that it truly was, focusing on mutual aid and creating a better world for black people, rather than the violent, terrorist organization it was made out to be by the American government.

Naturally, past is present, to paraphrase an old saying, and like many historical dramas, it positions its story as a commentary on current events, specifically the ongoing struggle for black liberation through the Black Lives Matter movement, and the film makes clear that the police are the militarized guardians of the status quo, dividing and conquering rather than serving and protecting. Kaluuya is as incredible as you've likely heard, but Stanfield is quietly heartbreaking as a man who sold his soul and gained nothing. The toll of upholding white supremacy hangs like a heavy weight on his shoulders, and it shows constantly behind his eyes.

Yet the film falls victim to an issue that plagued the similarly themed The Trial of the Chicago 7 in that it takes a radical subject and places it within the confines of a typical Hollywood narrative. While Judas and the Black Messiah is certainly a stronger film than Aaron Sorkin's Oscar hopeful, it's difficult not to wish this was bolder and more uncompromising. It's certainly bruising, and brimming with a righteous fury, but that fury has nowhere to go within the confines of its classical Hollywood formalism. You can feel it wanting to break free, to scream at the heavens and unleash its howl of anger at the injustice on display, but it seems to hold back and pull its punches; confined, like O'Neill, by a mold placed upon it by the establishment. But despite the dichotomy between form and content, it's difficult to shake the story the film tells, and the conviction with which it is told. Rather than simply recounting a historical event in a Hollywood vacuum, it offers a tantalizing (if imperfect) window into what the path forward from our current injustices might actually look like.