The harrowing border crossing from Mexico into the United States has been the subject of much debate for years, a controversy escalated by Donald Trump's "build the wall" campaign platform during the 2016 election and beyond. Yet for all the talk radio bloviating and xenophobic panics about "migrant caravans" that have highlighted the issue from the American side, we in the States rarely get to see things from the Mexican point of view. 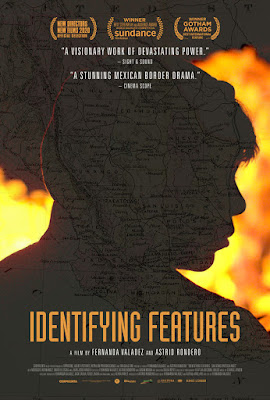 Enter Fernanda Valadez's savage Identifying Features, a gut-wrenching examination of the dangers of illegal border crossings that's framed almost as a horror movie. The film traces the journey of Magdalena (Mercedes Hernández), a woman searching desperately for her teenage son who attempted to make the crossing into the US with a friend to find work, only to vanish along the way. Working with the police becomes a nightmare - so many are lost along the crossing, leaving only small items behind, lost to hunger, bandits, or murderous gangs, that local authorities are left with few clues and even fewer resources to track down the leads. So Magdalena takes it upon herself to find her beloved Jesús (Juan Jesús Varela); her journey will lead her into the heart of darkness, accompanied by a young migrant worker named Miguel (David Illescas), searching  for his mother after being deported from the US. They become something akin to surrogate family for each other on their journey, but the answers they find may ultimately be more terrifying than the pain of not knowing the fates of their loved ones.

The picture Identifying Features paints is almost unrelentingly bleak, but it's nothing if not consistently compelling. Valadez's border is a vast, unknowable wasteland, where the risk of a crossing isn't worth the "reward" to be found on the other side. Valadez offers no solutions or musings on the politics of immigration, and instead focused on the tragedy of those lost in an attempt to find a better life, chasing a promise of prosperity that ultimately turns out to be in vain. Its austerity achieves almost abstract levels, with Valadez finding a kind of grim beauty in the barren landscape that recalls Alejandro Landes' Monos. Magdalena remains something of a blank slate throughout the film, but this allows the audience to place itself in her situation, and she becomes a kind of avatar for the viewer, guiding us into hell without ever bringing us back. The film's "twist" doesn't quite land with the impact that it should because it all happens so quickly, but it nevertheless leaves us shaken in its terrifying suddenness. There's an air of hopelessness to the entire affair, its characters trapped in a never-ending cycle of death and despair. If it sounds like a downer, that's because it is. But there's a fearsome power to Valadez's artistry that is hard to shake. It's a holy terror of a film, a raw, fiery modern "Heart of Darkness" that is an unforgettable exploration of what is being fled, and the cruel joke of what is being run towards.