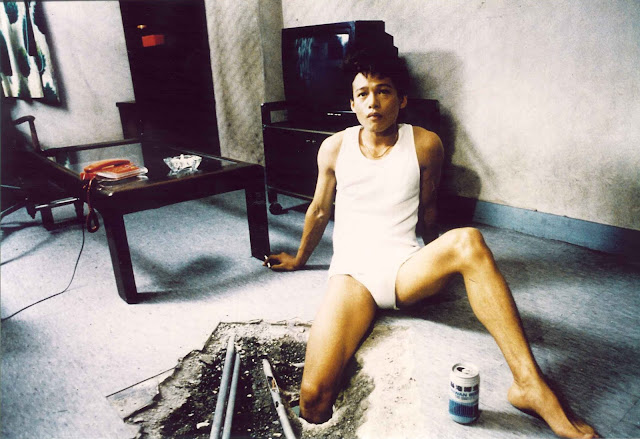 It has taken 22 years, but Tsai Ming-liang’s The Hole, which premiered at the 1998 Cannes Film Festival, has finally been released in the United States, and it couldn't have come at a more appropriate time. Set in the midst of a fictional pandemic, The Hole follows two neighbors, one upstairs, one downstairs, who are forced to navigate their new reality as the ennui of quarantine sets in. Their only connection is a hole that opens up in the floor between their apartments while a technician is working on their pipes to fix a leak, soon becoming a symbol of both hope and madness. 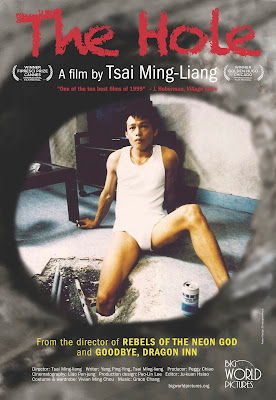 Discovering the film in 2020 in the era of COVID-19, as opposed to its original international release in 1998, casts a different light on things. Having just gone through the an actual global pandemic during which many of us were stuck in our homes for months on end, The Hole feels less like science fiction and more within the realm of reality. Tsai's particular aesthetic, with its languid long-takes and deliberate pacing, adds to the overall sense of stagnation - its characters adrift within the confines of their own four walls where time has lost all meaning, their only human connection coming from a hole in the ground (or in the ceiling, depending on their unique perspectives) as the virus slowly erodes their sense of humanity.

The monotony of their existence is broken up only by musical sequences that pop up unexpectedly, using the drab apartment building as a background for glittery lounge numbers, as if the characters are breaking from reality within the confines of quarantine, if only for a moment. The Hole masterfully channels the existential dread of quarantine in the midst of a pandemic in ways that have proven eerily prescient. And while the virus at the center, which makes its victims exhibit roach-like aversion to light, isn't exactly COVID, there are some unnerving similarities. Tsai's Kafakaesque existential nightmare turns quarantine into a uniquely harrowing love story, its digressions into abstraction in turn terrifying and rapturous. In the age of the novel coronavirus, The Hole has taken on a new power, a glimpse into the surrealism of self-isolation that finds both profound beauty and abject horror in the face of the unknown enemy lurking just outside, whose immediacy has only become more urgent in the two decades since its original release.