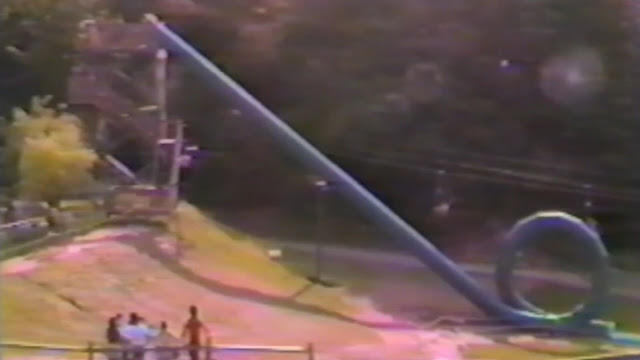 Class Action Park chronicles the so-bizarre-it-can-only-be-true story of New Jersey's infamous Action Park, a kind of do-it-yourself theme park that was so unsafe that it was responsible for countless injuries and even several deaths, earning it the nickname, "Class Action Park." 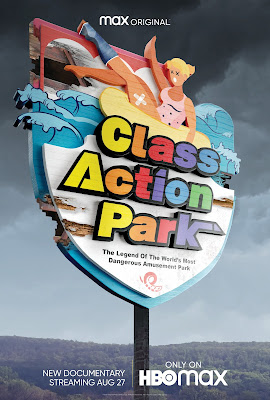 The whole thing was the brain child of Eugene Mulvihill, an unscrupulous developer who envisioned a park where the guest controlled their experience, going as fast and being as daring as they wished. The problem was that the park was designed by people who had no engineering degrees, putting "wouldn't that be cool" wish fulfillment into at the forefront of all the park's attractions, resulting in poorly designed thrill rides would result in scrapes, bruises, broken bones, missing teeth, and even death from being launched from rides or electrocuted in poorly wired water attractions.

Directors Seth Porges and Chris Charles Scott III examine the park from both a standpoint of kooky nostalgia from the point of view of former employees (many of whom were inexperienced teenagers who often ran the rides while intoxicated, if they supervised them at all) and guests who share bizarre childhood memories of the park's idiosyncrasies. Things take a serious turn in the back half, however, as they interview the family of 19 year old George Larsson, Jr. who was killed when he was launched from a faulty Alpine Slide vehicle and landed on some nearby rocks. Suddenly, the fun and games come to an end and the darker side of the film begins to come to light.

At its best, Class Action Park is an indictment of unrestrained capitalism. Muvilhill was a ruthless businessman who would beat anyone who opposed him into submission, dragging out court proceedings when injured guests sued him so that they would eventually give up. If he did lose, he would refuse to pay, forcing them to pay to have their money collected. In many ways, Action Park was the ultimate embodiment of the excesses of the 1980s, a perfect storm of capitalist greed and Reagan-era deregulatory policies. And yet the filmmakers can't quite seem to strike the balance of humor and horror inherent to the story. After it explores Larsson's death, the film struggles to return to the humorous childhood memories and snarky observations about its poor design and lax management. There's something kind of crass and a bit unseemly in the way it tries to view the park through the nostalgic lens of the "good old days when we were wild and free." to its credit, it does acknowledge the park's issues and the tragedies that for whatever reason did not shut the park down (it was in operation from 1978 to 1996), but its tonal shifts are often dizzying and don't seem to treat the subject with the gravity that it deserves.