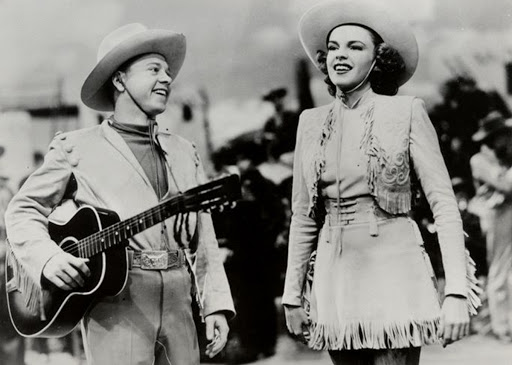 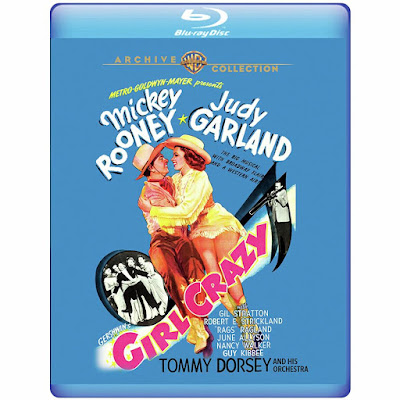 Mickey Rooney stars as Danny, a spoiled rich kid from New York who gets shipped off to a remote, all-male boarding school out west so he can focus on his studies and get away from his hard-partying, womanizing ways. Much to his surprise, however, the first person he meets is the dean's beautiful daughter, Ginger (Judy Garland) and becomes instantly smitten.

The problem is that the arrogant Danny becomes an immediate target for the other boys at the school, who all adore Ginger, and Ginger is more than a little amused by Danny's haplessness. But everyone is forced to come together to save the school, which will be closed down unless they come up with a large sum of money in a short amount of time. The solution? Put on a show, of course - and everyone has a grand time putting on a grand, Busby Berkeley choreographed western themed musical just in the nick of time.

Girl Crazy was the last and possibly the least of the collaborations between Mickey Rooney and Judy Garland (although Rooney referred to it as his favorite in a 2007 introduction included on the Blu-Ray), but it does feature a classic George and Ira Gershwin score (featuring the iconic song, "I Got Rhythm") from the original 1930 Broadway production starring Ginger Rogers, Allen Kearns, and Ethel Merman in her Broadway debut. Still, Berkeley was fired from the film after choreographic the "I Got Rhythm" finale (which was shot first), and as a result the film never quite achieves the same effortless charm his earlier collaborations between Rooney and Garland, including Babes on Broadway, Babes in Arms, and Strike Up the Band. They certainly made for an irresistible pair, however, even if Rooney's character here isn't one of his most likable. 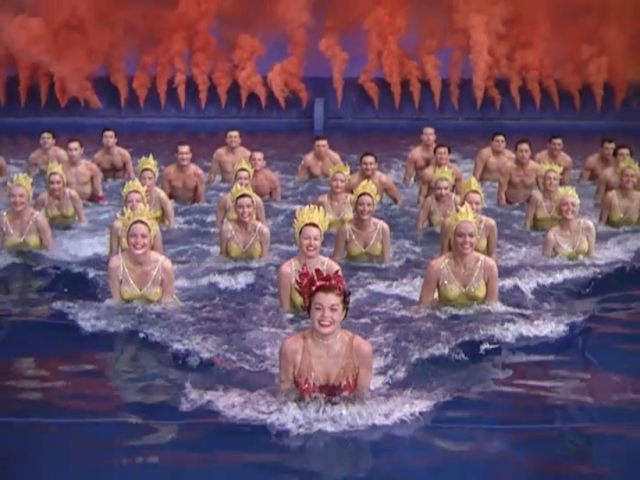 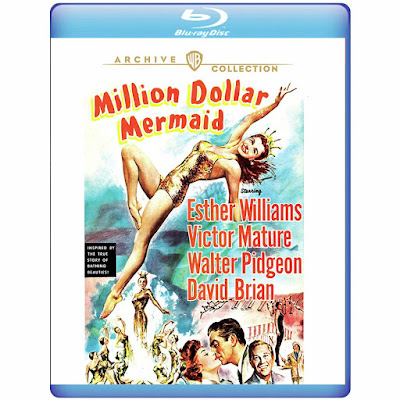 While Million Dollar Mermaid never quite reaches the delirious Depression-era razzle dazzle of the first Gold Diggers  it's nevertheless a throwback to those Warner Brothers extravaganzas that put Berkeley on the map. Williams' climactic performance at the Hippodrome is a gorgeous Technicolor spectacle complete with multi-colored smoke, leaping water curtains, and a co-ed group of synchronized swimmers that brought a new dimension to Berkeley's highly precise style. This film would be the last of its kind for Berkeley, whose brand of big budget, sky's the limit choreography had begun to go out of fashion by the end of the 1930s, but what a breathtaking throwback it is, hearkening back to the great choreographer's glory days with a new and ravishing addition of color. The film's badly faded cinematography has been restored to its Technicolor glory in Warner Archives' glorious new Blu-Ray restoration, which brings the film's true beauty into focus for the first time in years, making it a noticable improvement over the somewhat faded DVDs derived some damaged prints that are currently on the market. Million Dollar Mermaid is truly one of the most beautiful films of the 1950s, and it's a pleasure to watch Berkeley indulge his more expressionistic tendencies with a full palate of breathtaking color. Its drama may feel occasionally overcooked (the central romance never quite clicks due to Mature's lack of charisma), but Berkeley's choreography coupled with Williams' undeniable charm (not to mention a strong turn by Walter Pidgeon) gives it the added dimension it needs to soar. Sometimes you can teach old dogs new tricks.

Both films are now available on Blu-Ray from Warner Archive!