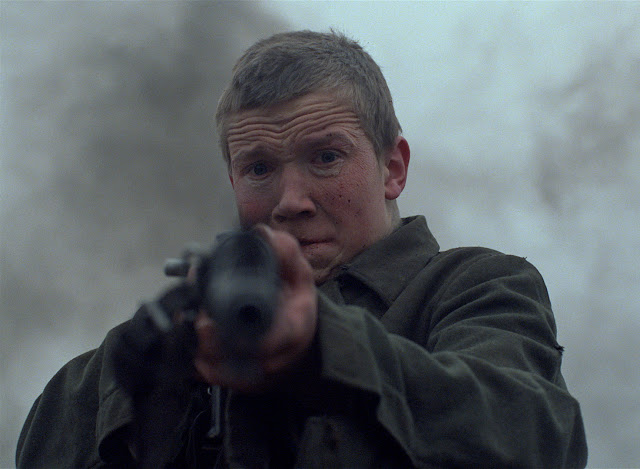 The grim visage of young Flyora (Aleksei Kravchenko), a 13-year-old Belarusian boy who goes off to defend the Soviet Union from the Nazi invasion of WWII, is one of the most searing images of Elem Klimov's barn-burning 1985 masterpiece, Come and See. 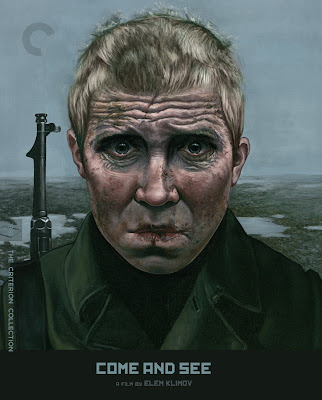 Flyora begins the film as a young, fresh-faced boy whose playful digging in the sand to find buried weapons left by dead soldiers in a seemingly long-forgotten war almost seems like a childhood war game; two boys playing at being soldiers in a fantasy world far removed from reality. But this is no fantasy - and soon Flyora finds himself dragged from his home to join the war effort with other resistance fighters from his tiny village. By the time the film ends, Flyora has gone from boy to man, but not in the typical hero's journey sense. Instead he ends the film a gaunt, hollow shell of the boy we met - his face covered in worry lines and crows feet - as if he's aged decades over the course of two hours.

And what a harrowing two hours it is - watching Come and See is an unrelenting experience, yet it's filled with a kind of grim, haunting beauty that's hard to shake, recalling Tarkovsky almost religious sense of weight (especially in Ivan's Childhood) in its remarkable evocation of horror and utter despair. Flyora's journey from innocence to cold, hardened killer is designed to be a warning - as he eventually devolves into the very thing he's fighting against. There are no winners in Klimov's vivid wartime nightmare - it tears down everyone and everything it touches. Few films can claim such a brutal and indelible impact - but Come and See has often been overlooked by critics and audiences since its release in 1985. And yet its one of the decade's crowning glories - a war film from the ages that Criterion has helped usher out of its relative obscurity with its recent theatrical re-release and new Blu-Ray edition that places the film squarely in the pantheon in which it belongs. One of the defining masterpieces of the 1980s has finally been given the home video treatment it deserves. Long unavailable, it is now ripe for discovery by a new generation of cinephiles  as one of the greatest war films of all time.


Now available from The Criterion Collection. 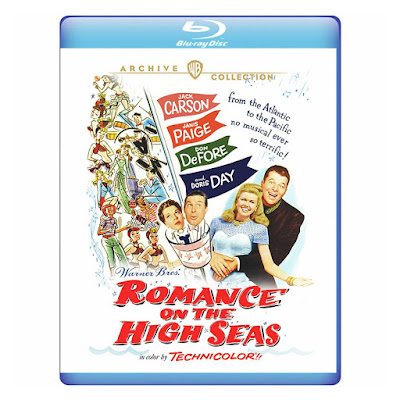 ROMANCE ON THE HIGH SEAS

Doris Day made her screen debut in Michael Crutiz' delightful seafaring musical, Romance on the High Seas (1948), starring as a young woman hired by a wealthy socialite (Janis Paige) to take her place on a cruise so she can stay behind and spy on her husband (Don DeFore), who she suspects of infidelity. Unbeknownst to her, her husband similarly suspects her of cheating on him, so he hires a private eye (Jack Carson) to trail her onto the ship. Lots of mistaken identities and ensue as Carson's private eye falls for Day's plucky singer, despite thinking she's his employer's wife the whole time.

Romance on the High Seas is an easy-going crowd pleaser, and it's easy to see why Day became such a huge star - her effervescent, folksy charm feels almost effortless, and Curtiz uses it to great effect here, balancing its  farcical plot threads with ease. The Busby Berkeley musical numbers aren't really anything to write home about, and are mostly static  when compared to his grand scale choreography of the 1930s, but the film isn't the same sort of lavish spectacular, favoring intimate, diagetic  scenes of shipboard lounge singing than using music to tell the story. 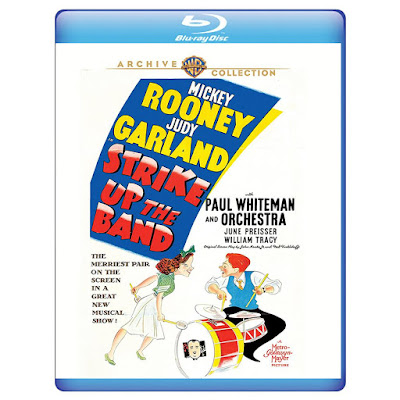 STRIKE UP THE BAND

Busby Berkeley's High School Musical - a rollicking musical extravaganza featuring Mickey Rooney as a young drummer whose dream of becoming a drummer takes off when he organizes a high school band to compete in a competition, where he is noticed by legendary big band leader, Paul Whiteman. Judy Garland is his faithful best friend, whose unrequited love for him constantly relegates her to second place as he keeps his eye on the prize.

Rooney and Garland are full of effervescent charm, and Berkeley delivers some of his strongest numbers of his MGM period, from the ingenious dancing fruit number (reportedly conceived by Vincent Minelli) to the grand finale at Whiteman's band competition. An utter delight from start to finish that showcases Rooney as the muti-talented star that he was, and gives star-on-the-rise Garland (fresh off the success of The Wizard of Oz) a chance to show off her range. It occasionally feels like its two-hour runtime is about 30 minutes too long, but its digressions are so amiable that it's hard to say what should be cut. Garland and Rooney, along with William Tracey (The Shop Around the Corner), June Preisser (Babes in Arms), and Larry Nunn (The Major and the Minor) recreating a turn-of-the-century melodrama at a high school talent show is such an unadulterated joy and one of the funniest set pieces of Berkeley's illustrious career. Don't miss this one.