Continuing their line of exploitation pictures from the 1930s, Kino Lorber and Something Weird have released two more volumes in their wildly entertaining home video series, Forbidden Fruit: The Golden Age of the Exploitation Picture.

While the last round included such notorious films as Reefer Madness and Mom and Dad, these two new discs feature four films that may be lesser known, but are no less lurid - in some cases, perhaps even more so. And while they may not be great cinema, most of them have an irresistible entertainment value that makes these historical curiosities so bad they're actually good. 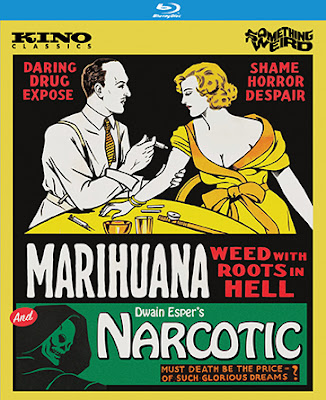 Dwain Esper made multiple "issue drama" exploitation films in the 1930s, including Maniac (1934), Narcotic (1933), and the short film, How to Undress in Front of Your Husband (1937). His 1936 film, Marihuana, is as much a takeoff on Reefer Madness (1936) as Esper's own Sex Madness would be two years later. Essentially a "slippery slope" drama, Marihuana (subtitled Weed with Roots in Hell), follows the exploits of a teenage girl who dabbles in marijuana and ends up as a heroin addict who kidnaps her own child. It's as weird and wild as one may expect, and in the best Esper tradition makes little sense - divorcing each of its characters from any logical human behavior in order to push his own particular agenda. It has the distinction of being one of the most unintentionally hilarious of these sanctimonious "issues of today" films of the period due to the sheer outlandishness of its plot, but ultimately it's a slog even at 58 minutes.

Of all of Dwain Esper's moralistic exploitation films of the 1930s, Narcotic is perhaps the "best," although I use that term loosely because you know going in basically what you're going to get here. It follows the journey of a doctor whose fascination with addiction leads him onto the slippery slope of becoming an addict himself, as he "studies" drug parties and opium dens under the guise of science, before succumbing to the very vices he's researching. The finger-wagging moralism is still here, although Esper seems to latch onto something vaguely more realistic here, even if the film itself plays on cringe-worthy  stereotypes and half-truths to get its point across. 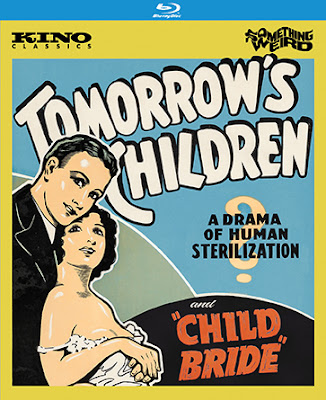 Tomorrow's Children (1934) is an interesting curio from the "socially conscious exploitation" genre from the 1930s, that takes a rather unique look at the horrors of eugenics from a decidedly skewed lens. While most films of this kind used sex and drugs as a way to entice in audiences with a lurid premise wrapped up in a moralistic veneer, Tomorrow's Children is something else altogether, putting forced sterilizations in the spotlight from a more religious version of morality than one of bodily autonomy.

The film centers around a family of ne're-do-wells who are singled out for sterilization by the state because of rampant mental illness, alcoholism, and criminal behavior that are present in nearly every member of the family -  that is except for Alice, the family's bright, well-adjusted daughter, who is engaged to be married. Targeted for sterilization, she sets out to plead her case in court before it's too late.

The film essentially takes a stance similar to arguments used by anti-abortionists, arguing against sterilization from the point of view of "you can't play god and interfere in the reproductive process" rather than "the state shouldn't be able to control people's bodies," but as a melodrama it's actually one of the most engaging exploitation films of the period. The performances are universally strong, and the film feels less like an amateur production and more like an actual film that just happens to be on a muckraking cause.

Perhaps one of the most notorious exploitation films the 1930s, Child Bride tells the story of a teacher on a crusade in her tiny mountain community to outlaw the practice of child marriage. Most of the story revolves around her, and it takes nearly 42 minutes of the film's 62 minute running time for the film to get around to the "child bride" part of its title (a common practice among these lurid  exploitation films), but when it finally gets around one of the local hillbillies attempting to marry a 12-year-old girl, things get extremely uncomfortable very quickly. Not just because of the subject matter (clearly the film is against the practice of child marriage), but the young star spends a good 5 minutes skinny-dipping while her suitor leers at her from the cliffs above.

It's the most infamous scene in the film, which is already easily the most disturbing of the exploitation films in Kino's Forbidden Fruit series. A great many of the films have become quaint with age, but Child Bride is a different animal altogether, and when the camera begins to leer at young Shirley Mills from the POV of her pedophilic suitor, the film ceases to be a goofy grind house curio and becomes something truly, darkly exploitative. The film was banned in many cities, but enjoyed a kind of cult popularity in grindhouse theaters across the country as its reputation grew. Don't let curiosity get the better of you on this one - avoid it like the plague.

Now available on Blu-Ray and DVD from Kino Lorber!