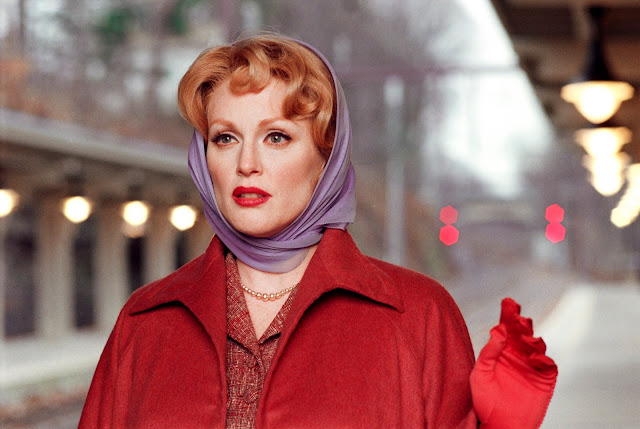 Todd Haynes' Far From Heaven isn't just a remarkable film because of how convincingly it emulates the cinematic language of a filmmaker (the great Douglas Sirk) whose peak came nearly half a century before it was released, but because of how Haynes so accurately uses that language to tell a more modern story that Sirk himself could have never told. 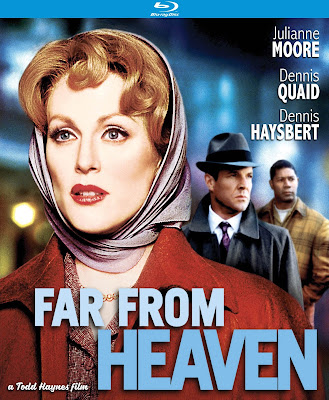 As a result, Far From Heaven feels like the Sirk film that Sirk never made, a long lost work from a Hollywood master who not only elevated the art form, but utilized the platform to advocate for social justice through the guise of overwrought soap operas. One does not have to look far to see the influence of Sirk's particular brand of melodrama in modern film, from Rainer Werner Fassbinder's German classic, Ali: Fear Eats the Soul to Guillermo Del Toro's recent Best Picture winner, The Shape of Water, the immaculate style and bold color palate that distinguished Sirk's films have inspired filmmakers for decades. Yet no one quite so brazenly attempted to pay homage to him as Haynes, who took the basic elements of Sirk's 1955 film, All that Heaven Allows  and reworked it into a searing, thoroughly modern treatise on race, sexuality, and the lies we tell ourselves in a society that only values conformity.

In All that Heaven Allows, Jane Wyman stars as a middle aged widow whose affair with her much younger gardener (Rock Hudson), creating a scandal amongst her children and the town as a whole. In Far From Heaven, Julianne Moore is Cathy Whitaker, a picture perfect 1950s housewife whose husband, Frank, is a successful business executive (together they make up "Mr. and Mrs. Magnatech" 1957). But underneath the seemingly perfect facade, trouble is brewing. Frank, it turns out, is gay, and despite his best efforts to "cure" himself, he can't overcome his own desires. Cathy turns her gardener, a black man named Raymond (Dennis Haysbert), for comfort, immediately scandalizing the town and turning Frank against her.

Hayes is clearly dealing with issues here that Sirk could have never directly addressed, but it's hard to escape the feeling that this is exactly how Sirk would have handled them. Far From Heaven is perhaps one of the most remarkable tributes by one filmmaker by another ever made. From the sumptuous costume design by Sandy Powell to Ed Lachmann's breathtaking Technicolor cinematography with its vibrant fall colors and striking blue tones (gorgeously rendered on the new Blu-Ray from Kino Lorber), to the luscious score by the legendary Elmer Bernstein (To Kill a Mockingbird), Far From Heaven is awash in stunning period detail in both style and substance. Its characters are all trapped, by their sexuality, their race, their gender, by the very artifice of the extravagant sets that surround them, unable to communicate with each other or express how they truly feel. As a result, the most profound moments are often found in what the characters can't bring themselves to actually say, the words left unspoken leaving the most lasting emotional impact. 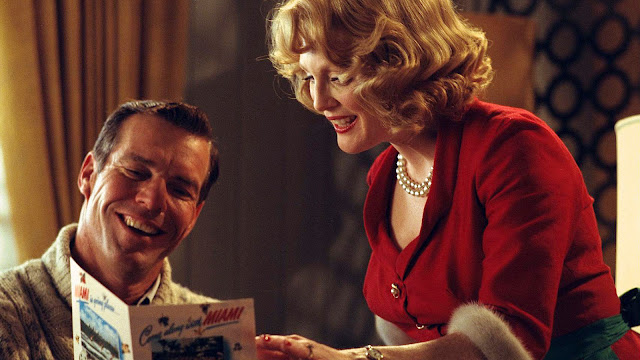 That's what makes Julianne Moore's Oscar-nominated performance so incredible (although she ended up losing the award to her co-star from The Hours, Nicole Kidman), she walks a fine line between emulating the acting style of 1950s melodramas and allowing moments of real emotion to shine through the cracks in the facade. Those moments when the real Cathy is allowed to appear are utterly devastating, and they say a lot about not only the world in which the characters lived, but the world we live in today. The elements of acting are essentially on display, but the way in which Moore uses those obvious, more presentational modes of expression becomes a kind of performance with a performance. It's a truly impressive thing to watch - it's one of the great acting achievements of the 21st century.

It's easy to look at a film that deals with ideas of homophobia and racism in the 1950s and think of these things as issues of another time (hi, Green Book), and yet despite its period trappings, Far From Heaven never feels anything less that contemporary. This isn't just about characters from the 1950s, it's about characters trapped by circumstance, by an intolerant society, by keeping up with appearances, spending a lifetime performing for others rather than living for one's self. Those performances make up the core of Haynes' film, a work filled with self-conscious artifice that uses its own artificiality to explore some essential truths. Never has such fakery felt so painfully, or so beautifully, honest.