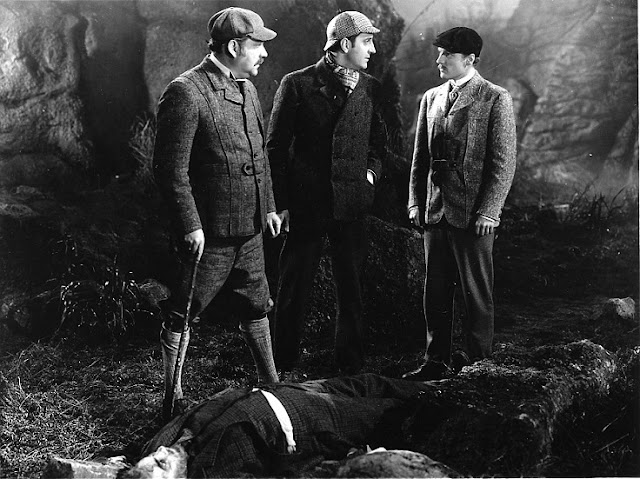 This 1929 German adaptation of Sir Arthur Conan Doyle's oft-told Sherlock Holmes mystery was the last of the silent Sherlocks, completed just as sound was taking over cinema and silent projects were being shelved or forgotten, seemingly lost in the dustbin of history. 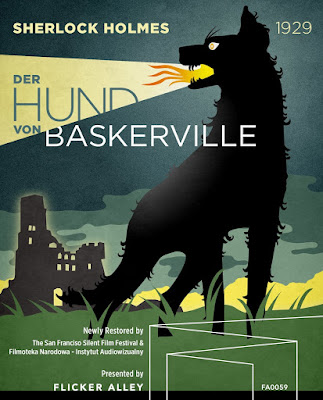 Richard Oswald's Der Hund von Baskerville did gangbuster business in its native Europe, but was never released in America, and thus was never able to really secure an American audience. The film was long thought lost, only for a near-complete 35mm nitrate print to be discovered in Poland in 2009. Missing footage was supplied by a 9.5mm print from a private collector that had been released for the home market in the 1930s (yes, those did exist back then), but the film remains incomplete - relying on publicity stills and intertitles derived from the original German censor records to present the most complete version possible in this new Blu-Ray release from Flicker Alley that at last presents the film to a worldwide audience for the first time.

And what a discovery it is. For a tale that has been told on film and television countless times, Der Hund von Baskerville feels startlingly fresh. Its style rooted is in German Expressionism, the film is a moody thriller filled with deep shadows, off-kilter camera angles, and imposing, gothic sets. Figures creep up eerie staircases, their shadows thrown up against the wall like Nosferatu, and the mist-shrouded moor where the titular hound claims its victims is appropriately chilling. In short, this is one of the finest adaptations of the story ever produced for film. Doyle purists may balk at some of the film's liberties with the original story, but Oswald's haunting take on the material gives it an appropriately mysterious sheen. Carlyle Blackwell's Holmes is dashing and mysterious, while George Seroff's Watson has a few amusing moments of comic relief as the old Baskerville mansion creaks in the night. 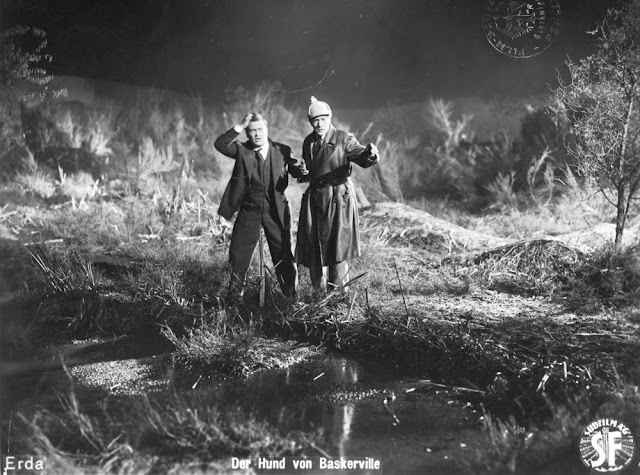 The 1914 version of Der Hund von Baskerville, also included on the new Blu-Ray as a special feature, is a different animal from the 1929 version altogether. Scripted by Oswald, but directed by Rudolf Meinert, the film uses Doyle's original story merely as a jumping off point for a tale all its own. Not as eerie or well designed as its 1929 remake, this film is nonetheless notable for the creativity of the liberties it takes with the source material.

There's no real mystery to be solved here; the villain is revealed before Sherlock Holmes even appears in the film. In fact, the villain actually disguises himself as Holmes, and attempts to blow up Baskerville Hall when the real Holmes finally arrives. This version of Holmes is something like a precursor to James Bond, cool under pressure with an affinity for gadgets and disguises (he even disguises himself as a suit of armor at one point to catch the villain). What it lacks in style it more than makes up for in sheer zaniness, throwing the text out the window in favor of a wildly inventive spy caper.

The disc also includes some fascinating behind-the-scenes materials, including a look at Doyle's sometimes strained relationship with the Holmes character, and an examination of the work that went into restoring the long lost 1929 film version. It's a discovery not only for fans of Sherlock Holmes, but for aficiandos of silent cinema as well.


Now available on Blu-Ray and DVD from Flicker Alley.