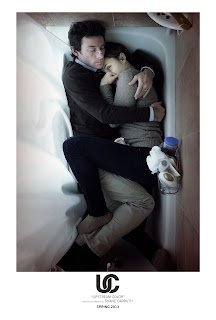 I see a lot of movies in my line of work, far more than I ever get a chance to review here. But out of the thousands upon thousands of films I've seen, I've never seen one quite like Shane Carruth's Upstream Color.

2013 has been a banner year for filmmakers crafting intensely singular, uncompromising works of art, such as Lucien Castaing-Taylor and Verena Paravel's Leviathan, Harmony Korine's Spring Breakers, and Bruno Dumont's Hors Satan. It is easy to slip into hyperbole when discussing these films, but sometimes words fail. Which may be a hoary cliche when discussing film, I don't know how many times I've rolled my eyes at another breathless declaration that "you've never seen anything like this before," when in all actuality we've seen it far too often. But in the case of a film like Upstream Color, words really do fail.

The beauty of it is that I think Carruth (Primer) actually designed it that way. You'll find very little dialogue in the film, at least of the variety that drives a typical plot. This is a film of textures, of sounds and feelings; any attempt to force or discern a plotline will only result in a headache. It's not that kind of film, and it wasn't meant to be.

The plot synopsis is the most simple of outlines - "A man and woman are drawn together, entangled in the lifecycle of an ageless organism. Identity becomes an illusion as they struggle to assemble the loose fragments of wrecked lives." You'll find no further explanation for the film from Carruth beyond those two sentences. But in the tradition of the early avant-garde filmakers like Bunuel, Kirsanoff, and Dulac, Carruth wants us to feel the film. As Bunuel once said, "film is like an involuntary imitation of a dream." And never has that been as true as it here. Upstream Color feels like a dream, or at the very least, a fevered hallucination. The kind that, as it begins to fade upon waking, leaves you wondering if you had actually seen what you thought you saw, even as you struggle to hold on to its finer details.

There are pigs, there are mind controlling worms, there is Thoreau's "Walden," all surrounding two lost souls who are inexorably bound by shared trauma. As they try to piece their lives back together after a seemingly random attack, memories of the past seem to collide with infinite possibility, refracting into multiple outcomes of the same scenario. The results are haunting, disorienting, and engrossing, at equal turns romantic and horrific. Even the simple act of making gromits becomes something strangely transcendent. As I mentioned before, the use of double exposures, along with its overall tone, make it a direct descendant of the early surrealists, with a dash of Lynch and Malick thrown in for good measure.

But Carruth has a voice all his own. Not only did he write, direct, and star in the film, he also composed its lovely, enthralling score as well. Upstream Color is a singular beauty of a film, a work that I have a feeling critics and film historians will be discussing and writing about for years to come. It's a gorgeous, utterly intoxicating Möbius strip, a wholly original work of art that defies simple categorization and achieves something few modern films ever do - a true sense of cinematic discovery.