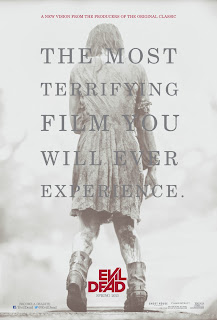 It has become somewhat of a trend for modern horror films to try and out-shock each other. From the Saw series to Hostel, it is almost as if filmmakers are trying to one-up each other in the gore department.

It's a shame that, in the process, many have forgotten what it actually means to be scary. Evil Dead is being advertised as "the most terrifying film you will ever experience." And it isn't, not by a longshot. But it might be the most disgusting.

Even that is pushing it. There have been far more disturbing films before - Cannibal Holocaust, A Serbian Film, I Spit on Your Grave, The Human Centipede II, just to name a few. But with the exception of The Human Centipede II, all of those films managed to achieve something that Evil Dead does not - they were truly terrifying. And while they remain controversial even today for their shockingly graphic nature, they have endured because the filmmakers weren't just grossing you out, they were getting under your skin in a way few films ever have.

As someone who wasn't a fan of Sam Raimi's original 1981 cult hit, I wasn't particularly offended by the idea of a remake. The cardinal sin of Evil Dead isn't that it's a remake, it's that ultimately it's pretty dull. The plot is still the same, five twenty somethings comverge on an old cabin out in the woods to stage an intervention for a friend who nearly overdosed on cocaine. Once there, they discover the Book of the Dead in the basement, and after reading it unleash demons who begin to systematically possess and destroy them one by one. Coming on the heels of Cabin in the Woods, Evil Dead seems almost goofy in comparison now, after its cliches have been so thoroughly deconstructed.

And then there's the gore. Evil Dead is absolutely soaked in it, somehow believing that grossing out an audience is the same thing as scaring them. The film is consistently trying to top itself - needles are stabbed through eyeballs, arms are cut off with electric knives, tongues sliced in half, limbs broken and twisted off, but for what purpose? It's as if director Fede Alvarez is standing behind the camera saying "oh you think that's sick? Watch this!" But it lacks the scare factor to back up its brazen display of grotesque imagery. Every "scare" is underlined with an outrageously overwrought music cue, as if Alvarez doesn't trust himself enough to be scare the audience, so he overemphasizes every moment to the point of silliness. Its sadism isn't even backed up by any real teeth like the work of Alexandre Aja, it's just gross rather than horrifying. Throw in some bizarrely offbeat performances that almost seem to be straight out of a horror movie parody, and you have the mess that is Evil Dead. Gore aficionados will certainly find a lot to enjoy here, but if you like a little meat with your blood, you'll find it to be a bit empty. It's not even bad or campy enough to be enjoyable B-grade horror. It's just another bland gore-fest that plays like the reheated remains of far better films that have come before.