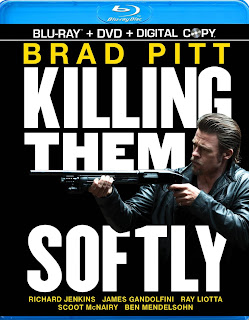 The 2008 financial crisis has been influencing filmmakers almost since the moment in came to light five years ago. From documentaries like Inside Job and Collapse to narrative films like Arbitrage and Margin Call. In Killing Them Softly, based on George V. Higgins' novel, Cogan's Trade, director Andrew Dominick set out to craft a more symbolic take on the financial crisis, and ended up making perhaps the most blatant of them all.

Brad Pitt stars as Jackie Cogan, a mob enforcer who is called in to hunt down two amateur crooks who rob a mob controlled poker den. Even the mob, it seems, has fallen on hard times, and while the mob leaders behave like corporate committee concerned with public image, Cogan gets down to business. The closer he gets to his goal, however, the messier and more complicated the whole situation gets. 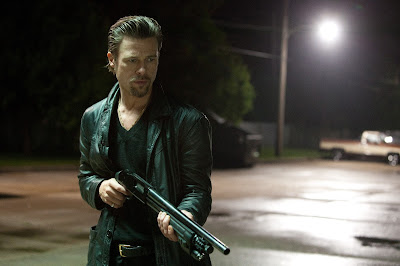 All the while, Dominick laces the scenes with sound bytes from 2008, using the words of Presidents Bush and Obama to draw clear parallels of the 2008 economic crisis with the acts of political thugs and criminals. It's about as subtle as a sledgehammer, with Dominick bashing us over the head with heavy handed political symbolism that's so in your face that it's almost laughable. It's a tough sit, because it feels like Dominick is preaching to us at every turn, constantly reminding us of his central theme without trusting the story to speak for itself. It's interesting that the director of the magnificent Assassination of Jesse James by the Coward Robert Ford followed it up with something completely lacking in subtlety, but Killing Them Softly is a cynical, obvious piece of work that leaves a bad taste in the mouth.

There are some fine performances here, especially from the supporting cast, which includes Richard Jenkins, James Gandolfini, Ray Liotta, and Scoot McNairy. The Weinstein Company's Blu-ray release is pretty bare bones, with only a few deleted scenes and a cursory "making of" featurette that offers no insight into the film. The film maintains its grungy darkness in HD, and Dominick's visual flair remains striking, even if the film itself reads more like an angry undergrad poli-sci essay. The craft is there, but the ideas are disappointingly simplistic, painting in broad strokes when it could have been so much more pointed using a finer brush.