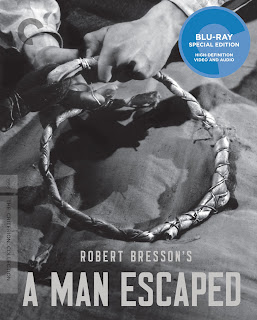 There are few films in the history of cinema that can claim to be as suspenseful or as nail-biting as Robert Bresson's 1956 masterpiece, A Man Escaped.

Based on a true story, which Bresson claims not to have embellished or enhanced in any way, A Man Escaped follows the exploits of Fontaine (François Leterrier), a French resistance fighter who is captured and imprisoned by the Nazis in occupied France during World War II. The reality of the story, as it turns out, is somewhat different from what we see on screen (the story of André Devigny, on which the film is based, ends on a less upbeat note), but Bresson indeed pares down the tale to its most essential elements.

Bresson had no use for the cinematic conventions of the time, which he felt created an atmosphere of excess and stifled the film's sense of realism.

Most of all, Bresson completely rejected the idea of acting, choosing instead to hire non-actors to play the roles. He felt that the very idea of acting was antithetical to cinema, betraying falsehood where the director sought to find truth. In A Man Escaped, Bresson casually observes Fontaine's methodical preparations to escape from prison, free from any cumbersome subplots or unnecessary dialogue. This is perhaps cinema in its purest form, freed from unnecessary accouterments and embellishments, and the result is absolutely riveting. The audience is completely glued to Fontaine's every move, Leterrier's performance is completely unencumbered by the business of acting. He just is, and that is what makes A Man Escaped so thoroughly fascinating.

Bresson's sparse style may not work in every setting (I've never been a big fan of The Trial of Joan of Arc), but here it attains an almost spiritual level. Fontaine's preparations for escape are so focused, so deeply driven by a desire for freedom, that it is almost as if he is on a divine quest. That feeling of providence is further reinforced by Fontaine's unwittingly interrupting his new neighbor's suicide attempt as he tries to communicate with him. Bresson has always had a certain fascination with spiritual matters, even when those elements aren't explicitly written on the surface. As such, A Man Escaped becomes a sort of prayer for freedom, a meditation on miracles, and a study of the deep and abiding human desire for freedom.

Criterion's Blu-ray transfer of the film is simply stunning, both crisp and cinematic. There are plenty of supplements celebrating Bresson, featuring iconic devotees like Louis Malle, Andrei Tarkovsky, Paul Schrader, and Bruno Dumont, as well as analyzation from David Bordwell and Kristen Thompson. This is, without a doubt, one of the greatest films ever made, a film both thrilling and meditative, that should serve as a textbook for modern filmmakers on how to create and sustain suspense. It is an essential addition to every cinephile's collection.