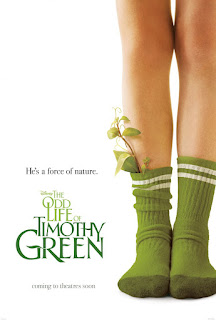 Peter Hedges' The Odd Life of Timothy Green is one of those movies that most people can probably tell whether they will love or hate just by reading a brief plot synopsis. It might as well come with a disclaimer that reads "cynics need not apply."

It's certainly a schmaltz-fest. That much is clear just from the advertisements. This being a Disney movie, it unashamedly wears its heart on its sleeve, but the real question here is - when did that become a bad thing?

We film critics tend to be a cynical lot, coldly examining the technical merits of a film and exploring its inner meanings (intended or not) and political ramifications that we often fail to just sit back and let a movie speak to us. The fact is not all movies are made to stimulate the brain. Some are made to stimulate the heart. And that's not always something that should be completely written off.

This is especially true when a movie is clearly made with children in mind. The Odd Life of Timothy Green is reminiscent in some ways of the live action fare Disney released during the 1960s such as Pollyanna and The Parent Trap, wherein precocious children arrived in seemingly unusual circumstances and were often more grown up than the adults around them. The film that Timothy Green most resembles, however, is the similarly titled The Curious Case of Benjamin Button, but rather than the dark mysticism of that film, Hedges embraces a sunny, fable-like quality that makes this an unmistakably Disney affair. But underneath its sunny exterior is something unexpectedly moving and even grown up, dealing with issues of mortality and child adoption. Timothy Green isn't just for kids. It's a movie for parents too.

Ultimately, it is a movie about parenting. A childless couple, Cindy and Jim Green (Jennifer Garner and Joel Edgerton), have tried desperately for years to have a child of their own. After exhausting every known medical solution, the doctors finally tell them to give up. Heartbroken, the couple sits down and makes a list of every quality their imaginary child might have had, and in order to move on, they put the slips of paper in a box and bury it in the garden. That night, something magical happens, and out from the garden emerges the son they'd always dreamed of - an eight year old boy named Timothy (CJ Adams). Timothy is a seemingly normal child except for one thing - he has leaves growing out of his legs. Timothy quickly becomes part of the family, exhibiting all the traits they'd hoped he'd have. But as he touches the lives of all those around him, autumn begins to set in, and as Timothy's leaves begin to fall, it soon becomes apparent that he's hiding a painful secret that will change their lives forever.

Timothy Green follows a familiar path, surrounded by an admittedly idiosyncratic story that gives its somewhat cliched trappings a unique spin. Hedges, a North Carolina School of the Arts graduate who also helmed Pieces of April and Dan in Real Life, keeps this unusual tale grounded in tangible emotion rather than in grandiose mysticism or baldly manipulative strokes. It may be cloying at times, yes, and one's tolerance for the film will depend heavily on one's acceptance of the conceit along with their tolerance for often overt sentimentality. Such things must walk a very fine line in order to work and work well without turning the audience off completely. Hedges walks that line, performing a delicate balancing act that keeps The Odd Life of Timothy Green from descending into some sort of unwatchable schmaltzy soup.

It is the film's earnestness that makes it so winning. In an era when irony seems to pervade our popular culture, Timothy Green's unabashed innocence seems like something out of another time. It embraces its simplicity wholeheartedly, and emerges as something both deeply beautiful and completely charming. Shot in gorgeous, warm tones by John Toll (Braveheart, The Thin Red Line) and scored with a disarming tenderness by Geoff Zanelli (The Pacific), The Odd Life of Timothy Green is anchored by a strong performance by newcomer CJ Adams in the title role. Surrounded by an impeccable supporting cast that includes M. Emmet Walsh, Lois Smith, Dianne Wiest, Rosemarie DeWitt, David Morse, and Shohreh Aghdashloo, the film weasels its way into the heart and stays there, and those who are open to its particular charms will find a lot to cherish. Those who will find it unbearable (and you know who you are) are advised to stay far away. This isn't a film to be analyzed and picked apart for what it's not. It's a film to be felt for what it is. With an open heart (and an open mind), The Odd Life of Timothy Green is a wholly magical experience - a refreshingly old fashioned fable for the young and the young at heart.