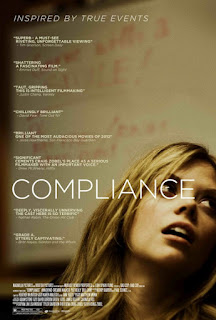 Craig Zobel's 2007 feature debut, Great World of Sound, remains one of the most criminally overlooked and underseen films of the last decade. An exceedingly clever and charming comedy, the film remains one of the strongest and most original directorial debuts in years, an achievement for which Zobel has received precious little recognition in the ensuing years.

His sophomore effort, Compliance, like Great World of Sound, was one of the talks of this year's Sundance Film Festival, but for a totally different reason. Unlike Zobel's first film, Compliance found itself embroiled in controversy, inspiring a great number of walkouts and even in-house shouting matches that turned the film into a strangely undeserved hot-button issue.The talk, rather than centering on how good the film is, became more about how controversial it was. The controversy is much ado about nothing, in my opinion. What we really should be talking about is what a striking and assured film Compliance is. It has taken the indie circuit by storm and critics are beginning to sit up and take notice of Zobel's now readily apparent talent.

While Compliance shows that Great World of Sound was no fluke, it could not be a more different film. Based on a chilling true story, Compliance introduces us to Becky (Dreama Walker) a pretty young fast food worker who becomes the victim of a systematic sexual assault when a man posing as a police officer calls her harried manager, Sandra (Ann Dowd), and accuses her of theft. Starting out with a plausible enough story, the man asks Sandra to take Becky in the back room for questioning. Even as his demands become more and more outlandish, Sandra, Becky, and the other employees of the Chick Witch remain shockingly compliant, blindly following his orders in the harrowing emotional and physical degradation of an innocent young woman.

It's a nerve-wracking and frustrating viewing experience as it becomes increasingly obvious that something isn't right. But over 70 such cases have been reported in 30 different states. It's a fascinating and deeply disturbing exploration of human psychology and the desire to "just follow orders." Even though they never see the man on the other end of the phone, they take him at his word that he is a police officer, and that idea of authority drives them to do the unspeakable in the name of obedience.

What Zobel has accomplished here is something very impressive indeed. He keeps the action mostly confined to a tiny store room, with one of the principle characters only a vocal presence on the other end of a phone, and delivers one of the most harrowing thrillers of the year. Zobel proves that you don't need car chases, gunfights, and explosions to keep an audience on the edge of its seat, he does it by slowly working his way under our skin, making us profoundly uncomfortable, and almost making us complicit in the despicable deeds on screen. The audience becomes a passive 3rd party in the room, watching silently, helplessly, as the unthinkable unfolds before our very eyes.

It's easy to pass judgments on the characters for their complicity in such atrocity, but Zobel doesn't let us off the hook so easily. He confronts us with inescapable questions of what we would really do in such a situation? Would we catch the deception right off the bat? Or would we fall for the seductive comfort of the appearance of authority, cloaked in the reassurance that we are no longer responsible for what is actually going on? Zobel manages to divide our sympathies between characters, between the victim and the agents of her humiliation, and the blurred lines between them, creating a complex and unnerving psychological thriller that is unmistakably the work of a promising and daring new talent.