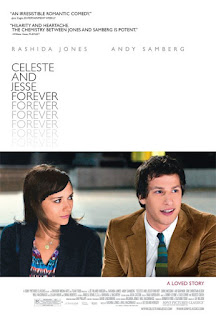 There are few more tired subgenres than the quirky romantic comedy. It has been interesting to watch how indie romances have turned into their own specific genre over the last couple of decades, complete with their own particular cliches and familiar rhythms.

To its credit, Lee Toland Krieger's Celeste and Jesse Forever attempts to look at the genre from a new angle, from the point of view of a couple that has just broken up and are embarking on a new era of friendship. Unfortunately it gets caught up in some of the same tired tropes that have plagued the genre for years.

Celeste (Rashida Jones, who also co-wrote the screenplay) and Jesse (Andy Samberg) have just had the perfect breakup. By civilly acknowledging their differences and lack of romantic compatibility, they have managed to remain best friends, still spending nearly all their time together (Jesse lives in a loft in Celeste's back yard) and going out on "dates" with their friends.

But their continued friendship and the fact that nothing has changed between them other than the lack of sex makes some of their friends uncomfortable, who believe that there must be some attraction left between them, despite their insistence to the contrary. Jesse seems stuck in perpetual childhood, a thirtysomething man-child who would rather play video games and watch the Chinese Olympics all day than take on anything resembling adult responsibility. Celeste is a driven career woman, a "trend forecaster" who has just written a book that she wishes were more successful. It is clear that they are on very different paths, and Celeste wants someone more mature to be the father of her children.

Things change when Jesse starts dating another woman, a beautiful old flame named Veronica (Rebecca Dayan), raising up a swell of unexpected feelings in Celeste - jealousy, regret, sadness. When it is revealed that Jesse is going to be the father of Veronica's child, their relationship takes on a new timbre. The two of them clearly still have feelings for each other, but are once again on different paths, and each may finally be moving on for good.

Celeste and Jesse Forever is a surprisingly serious minded film, especially considering its comedic aspirations. There is a lot to be said here about the nature of love and the importance of timing in any relationship. But the film is ultimately done in by its self consciously quirky screenplay. It simply tries too hard to be funny and hip, throwing in seemingly random, non-sequiter jokes that seemed designed to be charming or bizarrely humorous but just don't work. It's the kind of film that mistakes quirks for character development, and when such eccentricities become a distraction or feel forced, as they do here, then the blame must fall squarely on the writing.

It's a shame, too, because there is a lot of potential in its premise, and there are some nice moments provided by the leads. Krieger takes us in unexpected directions, which is especially rare in a film like this, imbuing the film with a kind of wistful melancholy that is hard to shake. But the awkward structure and stilted attempts at faux-quirk leave a bad taste. Rather than just allowing the humor to flow naturally from the characters and situations, it instead chooses to push the wrong buttons in a misguided attempt to be funny. Like Elijah Wood's awkward sassy gay boss who doesn't know how to be sassy, Celeste and Jesse Forever doesn't seem to know how to be the film it so desperately wants to be.