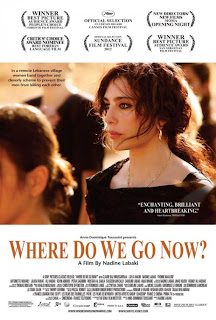 As an admirer of Nadine Labaki's seductive Lebanese romance, Caramel, it is hard not to get caught up in the singular warmth of the world she creates.

Her latest film, Where Do We Go Now, is something of a different animal. Made with the same sort of warm, intoxicating atmosphere, the film nevertheless deals with a much more serious and socially relevant topic - Christian/Muslim relations in Lebanon. Yes, Labaki has made a comedy about one of the most volatile situations in the region, tackling the violence head on with a sort of twinkle in her eye that is at once irresistible and off-putting. It's a strange mix to be sure, but it works occasionally when the film is focused on its goal. But it is often unfocused and even tonally unbalanced in its quest to find humor in a grim situation. Not as overtly ludicrous as some like, say, West Bank Story, which turned the Palestian/Israeli conflict into a West Side Story parody, the film is nevertheless caught between its own noble intentions and its inability to jell them into a cohesive whole.


Set up like some sort of modern day twist on "Lysistrata," Where Do We Go Now tells the story of a small Lebanese village where Christians and Muslims live in harmony,and  the church and the synagogue face each other across the town square. But when the sectarian violence from the outside begins to reach their small town, suspicions are raised, old rivalries rekindled, and hostilities boil over, and soon the townsfolk are in all out war with each other. So the wives band together to find a way to stop their fighting husbands from tearing apart the truce that has held them all together for centuries.

It's a noble ideal, but its hampered by the oddly inconsistent tone of the film, which switches from romance, to comedy, to musical, to drama to tragedy seemingly at random. The ingredients are all undeniably tasty, but they never quite add up to anything particularly memorable. It's a nice film, but that's not necessarily a compliment, especially when dealing with such potentially rich subject matter. For all its style and beauty, Where Do We Go Now lacks the singular drive to reach any great heights. Its heart is certainly in the right place, but ultimately the question isn't "where do we go now?" But, "what has the film accomplished?"

The answer is unfortunately very little.