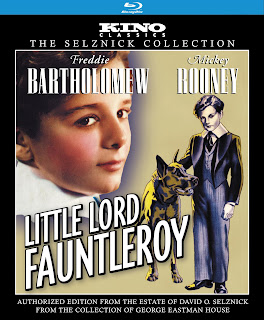 The name Little Lord Fauntleroy has come to be synonymous with overdressed children to the point that most have probably heard the term thrown around at some point or another, but don't necessarily know the origin.

Based on the novel by Frances Hodgson Burnett, Little Lord Fauntleroy was first adapted for the screen in 1914, followed by a popular silent feature starring Mary Pickford in a dual role in 1921. The definitive version, however, is perhaps John Cromwell's 1936 adaptation produced by mega producer David O. Selznick (who would go on to rack up 10 Oscars three years later for Gone With the Wind), and starring a precocious Freddie Bartholomew and Mickey Rooney.

Bartholomew stars as Ceddie, a young English boy living in America with his mother (Dolores Costello), who he calls "Dearest," after what his late father once called her.

He likes to dress in nice clothes, a leftover habit from his English father, and cruises around the neighborhood on a fancy new bicycle, which earns him the contempt of the local kids, save for one - Dick (Rooney). The qualities that alienate most of the children his own age endear him to the local shopkeepers, who are charmed by his kind, mannerly demeanor. When he receives a message that he is to return to England to inherit has grandfather's estate as Lord Fauntleroy, Ceddie rises to the challenge. His grandfather, however, is a cold man with a deep dislike of Ceddie's mother. Ceddie's charm will not only melt the old man's heart, but reunite his family. But that charm may not be enough to save his title when a new heir to the estate is produced, and it falls to his American friends to ride to the rescue.

There is something almost naive about the upbeat story of Little Lord Fauntleroy. It's a simple children's story, idealistic and dangerously close to cloying, but in the best tradition of Old Hollywood, it's a real treat.  Cromwell infuses the film with that sort of indefatigably positive outlook that so characterized Hollywood films of the era, and it's hard to resist. The new blu-ray by Kino Classics may not be perfect (it's completely devoid of special features and has quite a bit of imperfections in the negative), but overall it's a fine clean up of a lesser known entry into Selznick's canon. Studios don't make movies for kids like this one anymore. You'll be hard pressed to find anything today with this level of emotional punch in the product being shilled on kids today. Little Lord Fauntleroy has personality and heart to spare. It's a product of another time, to be sure, and may seem somewhat corny to the more jaded audiences of today. But sometimes films like this just hit the spot, and this one is simply irresistible.