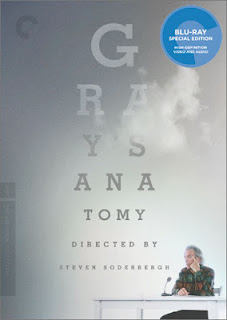 The idea of watching a filmed monologue doesn't exactly sounds like an exciting prospect. But under the direction of Steven Soderbergh, one of Hollywood's most unusual and unpredictable filmmakers, the 1997 film, Gray's Anatomy rivets and enthralls through just the words of one man sitting at a table.

Spalding Gray, actor, author, and raconteur, was perhaps best known for his monologues (or monologs, as he preferred to call them) in which he turned anecdotes from his life into sardonic, often scathing, meditations on existence. These humorous, neurotic observations on the world around him garnered him a devoted following, and in 1996 Soderbergh filmed one of Gray's monologs about an eye condition he contracted that required him to have corrective surgery. The monolog goes from diagnosis, to treatment, to the variety of remedies and strange miracle cures that Gray pursues rather than conventional surgery, trying anything he can to avoid the slim chance that surgery will result in blindness.

Through Gray's own unique insights, Gray's Anatomy becomes a kind of strange examination of human existence; frail, idiosyncratic, and ultimately a kind of cosmic joke. Gray keeps us hanging on his every word, as Soderbergh somehow turns a one man show into absolutely riveting cinema. Gray's style is almost akin to folklorists and traditional storytellers but his subjects are decidedly more modern. It is not necessarily cinematic in the conventional sense, but it works. Then again, things are rarely very conventional when it comes to Soderbergh. Soundly rejecting the auteur label with his refusal to repeat himself, there is no clearly defined Soderbergh style. He starts fresh with each film, and it is their lack of an auteurist stamp that distinguishes them. 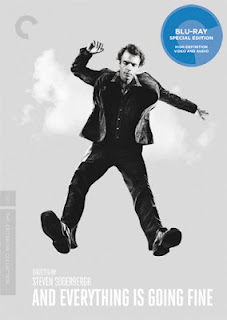 Soderbergh returned to Gray 13 years later for his 2010 follow up, And Everything is Going Fine. Made after Gray's apparent suicide in 2004, the film uses excerpts of monologs and interviews with the writer to create a kind of tribute to his life using his own words. By its very nature, it is a less cohesive film than its predecessor, but it is also a more passionate one. Soderbergh clearly felt very strongly about Gray, and And Everything is Going Fine comes across as Gray's final monolog about his life made from beyond the grave.


As a portrait of an artist it is decidedly one sided, but then again such is the nature of Gray's monologs. Gray remains an incisive presence even after a car accident left him crippled in 2001. It is clear, however, that the fire just isn't in him anymore, and it's tragic watching his steady decline. And Everything is Going Fine is not a typical tribute by an artist to another artist, it's almost like a tribute by an artist to himself.
>

That's what sets it apart, I think. Not a documentary, not a fictional film, And Everything is Going Fine exists in its own special realm. Less singularly fascinating, perhaps, than Gray's Anatomy, it is still a pretty powerful experience. It is able to peel back the layers of Gray's often guarded personality (even though he spent his life sharing his with others) to find the real man beneath, and it's an achievement of which I believe Gray would have been proud.


Criterion's new blu-ray release feels a bit superflous, despite typically excellent supplements. Featuring the complete recordings of some of Gray's other monologs, the special features are home runs. But since much of these films were taken from VHS recordings, there isn't much even a blu-ray can do in terms of image quality. Taken together, however, these films are a vibrant portrait of an even more vibrant man, and worthy entries into the collection. They may not be Soderbergh's most famous films, but they remain hidden gems in two very unique careers.