Blu-ray Review | "The Birth of a Nation" 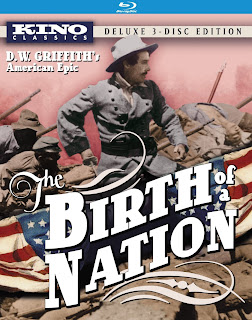 There are few films throughout history that have been the cause of such impassioned debate and controversy as D.W. Griffith's 1915 epic, The Birth of a Nation.

It's difficult to judge the film objectively because of its blatantly racist content and the passionate condemnation that it inspires. The NAACP has spoken out against it repeatedly, and many have sought to have it banned. Even the American Film Institute distanced themselves from it after naming it one of the 100 greatest American films in 1997. When they re-did the list for its 10th anniversary, the film was conspicuously absent, having been replaced by Griffith's 1916 follow-up, Intolerance, which was meant as an atonement for the sins of his previous feature, which had gained not only widespread popularity, but widespread anger and vilification. Intolerance is doubtless a masterpiece, but to back away from Birth, which was the true trailblazer and the greater film, is an injustice of overly sensitive political correctness.

That's not to say that the film isn't highly offensive, because it most certainly is. And any person of any moral character whatsoever should be offended by it, because it is by all accounts an extremely racist film. It is a testament to the Confederacy, and a celebration of the Ku Klux Klan as a heroic liberating force riding to the rescue of helpless whites against lawless African American hordes in the Reconstruction era American South. Its portrayal of African Americans, often as uncivilized barbarians, is shamelessly stereotypical at best, completely abhorrent at worst (one of its principle villains is a scheming mulatto politician), and it's hard not to cringe as leering escaped slaves try to rape white women, or as the KKK mount their horses, don their hoods, and ride into battle as conquering heroes. Griffith never saw himself as a racist however. He simply thought he was portraying history as accurately as possible. That doesn't excuse the doggedly wrong-headed point of view, but he never intended The Birth of a Nation to be a mean-spirited screed against black people that in many ways it turned out to be.

There is no denying, however, that The Birth of a Nation is a masterful piece of filmmaking. President Woodrow Wilson himself said, upon seeing the film, that it was "like history written by lightning." And indeed it often feels as if Griffith was actually there filming Civil War battles as they happened. The film's historical facsimiles, some featuring Abraham Lincoln, feel as if we are watching Lincoln himself on screen, perhaps partially due to the film's age but mostly due to Griffith's painstaking attention to detail. Griffith's use of cross-cutting between three different locations and three different conflicts in the film's dizzying climax was pioneering at the time. There was no guarantee that audiences in 1915 would accept that these three battles were happening simultaneously as Griffith cuts in and out of the action in the three locales rather than showing the action linearly as many other filmmakers of the era would have done.

As it turned out, audiences loved it, making it not only the first blockbuster, but the first "respectable" film. Before Birth of a Nation, film was considered a lower form of art, and was relegated mostly to nickelodeons and frequent haunts of the lower classes. But Birth of a Nation brought cinema into the mainstream in a way no other film had. Feature length films were extremely rare in 1915, let alone one that clocks in at nearly three hours long. But the epic melodrama of two families divided by war appealed to a mass audience, and was screened in opera houses, respectable theaters, and was the first film screened at the White House, prompting President Wilson to issue his now famous (and soon after recanted) declaration about its historical accuracy.

But with great popularity came great controversy. Even in 1915 its casual racism was not particularly well received, and it has remained an object of controversy to this day. It's easy to see why. It's a difficult film to get behind, let alone praise, without appearing to support its contemptible worldview. It is essential then, when considering Birth of a Nation, to separate its content from its construction, which is undeniably brilliant. What Griffith achieved here is nothing short of the birth of film as we know it, pioneering cinematic techniques that are still being used today, laying the groundwork for the modern epic film as we know it. And now, thanks to Kino Classics, it looks better than it ever has on blu-ray. The film is 96 years old, so it can only so clear, but Kino has given it the clearest presentation it has ever had, reducing the fuzz and sharpening the contrast. It still the typical scratches and imperfections, but it's still remarkably clean for a film that's almost a century old. The only issue for me is the new score, which doesn't work as well as the score on Kino's previous DVD edition, which is included in the package on a separate disc. The new score never really seems to fit the action on screen, while the previous edition's score fit it like a glove, blaring out "Ride of the Valkyries" in during the film's climax. Still, for the best presentation of it available, the blu-ray is second to none. It's a worthy upgrade of one of the greatest films of all time, that despite reprehensible racial content remains one of the most impressive and jaw-dropping achievements in film history.