This being my first awards season as a member of the Online Film Critics Society, it's also my first year receiving For Your Consideration screeners. I'm not the kind of person that likes to brag about the kind of swag I receive from studios, but it has taught me one thing - I now fully understand how smaller films often get lost at the Oscars. 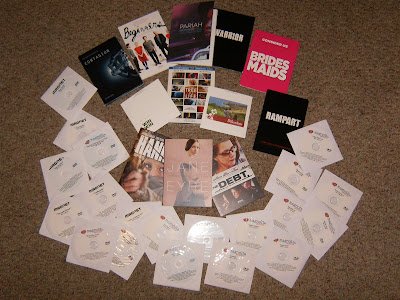 There are such an enormous and overwhelming amount of screeners flowing in at such a steady pace that it's almost impossible to get around to watching all of them. As a result, the major titles with a lot of buzz like The Descendants go to the top of the pile, while the movies that people aren't talking about as much end up on the bottom.

It's a sad truth but it is true. And while trying to keep up with screeners I'm still trying to keep on top of new theatrical releases, and current DVD and blu-rays, so I know industry folks like actors and directors don't have time to watch them all either. Screeners are a terrific way to catch up on things you may have missed, as well as a great marketing tool for studios, especially if you get them out there early. They want their movies out there and talked about by the movers and shakers, and especially winning awards. But from now on I'll be less quick to criticize the Academy for their nomination choices, as I understand how hard it is to see everything, and seeing everything is my job.

Now once they make the nominations they're fair game. There's no longer any excuse for not seeing all the nominees. But in this last run up to nominations time, you're doing good just to keep your head above water, and now I understand how easy it is for smaller films to get lost in the mix.
Email Post